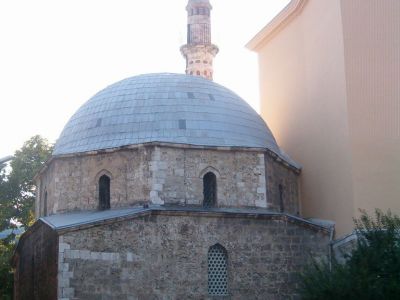 The Jakovali Hassan Mosque was built in the second half of the sixteenth century. The present mosque is the only mosque in Hungary that has remained intact with its minaret since the times of Turkish rule. Later, from 1702 to 1732, after the Turkish occupation, the mosque was remodeled into the chapel and named after Saint John of Nepomuk. The Pecs Bishop gave a Baroque look to the church from the outside and established a choir stand on the inside. In the 20th century the church was remodeled: the Baroque-styled architecture was demolished and the original floor level was restored. The original furniture of the mosque follows religious specifications and the Muslim community of Pecs uses the mosque regularly. The beautiful pulpit and the so-called preaching place are made of rosewood, and a special stand surrounded by a fence indicates the place for the women.
Image by Váradi Zsolt on Wikimedia under Creative Commons License.