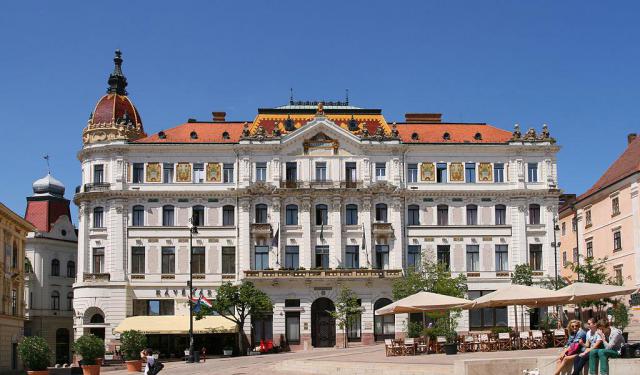 The city of Pecs has been the point of intersection of many eras, religions and political views. Since its time as the capital of the Valeria province of the Roman Empire, the city has maintained its historic cultural heritage. Take this orientation walk to visit the most popular and prominent sights of the city.
Image Courtesy of Wikimedia and Lestat.
How it works: Download the app "GPSmyCity: Walks in 1K+ Cities" from iTunes App Store or Google Play to your mobile phone or tablet. The app turns your mobile device into a personal tour guide and its built-in GPS navigation functions guide you from one tour stop to next. The app works offline, so no data plan is needed when traveling abroad.

The City Hall is a fine example of Neobaroque style with a hint of eclectic design. It was built in 1907. If you stand on Széchenyi Square you can hear City Hall's bell that has rung every hour since 1871! The building has a great history. It was demolished and restored several times: in 1695, and then in 1834 when it was presented as a Classicist-styled building designed by József Piatsek. By the year 1895 the city required a new larger building for its needs and the city assembly decided to built the current City Hall.
Image Courtesy of Wikimedia and Csörföly Dániel.
2

The County Hall is probably the most beautifully decorated building on Széchenyi Square. Some of the decorations were made by the Zsolnay factory foremen. It was built in 1897. In 1954 part of the building burned down, but later it was reconstructed with a new roof that was simpler than previously. Notably, the front space of the building from the side of the street was constructed by Jesuits between 1716 and 1726. They took some tombstones from the Turkish cemetery. Curious visitors may notice wonderful frescos made by Ernő Gebauer, above the stairs, which describe the foundation of the first university of Pécs. There is also a small park in front of the building where you can see a marble bust of Leonardo da Vinci.
Image Courtesy of Wikimedia and Csörföly Dániel.
3

The National Theatre of Pécs is the main theatre of the city. Theatrical plays became a regular attraction in the city from the beginning of the 19th century in German and Hungarian language. Most often they were arranged in larger dancing halls, inns, the small stage of Tettye or the Elefánt-house Inn. While being continuously planned from 1815 onwards, the first theatre opened only in 1840 in the Mária street. Demolished in 1890, only a sketch of the facade remained from this building.

To meet the demand for a high-quality structure, the city council set up a committee, led by mayor János Aidinger to coordinate the planning. The design competition of 1890 was won by Adolf Lang and Adolf Steinhardt, who, in cooperation with the renowned Fellner-Helmer duo, and 10 000 Ft granted by the county council, started the construction. The premiere was held on 5 October 1895 with the play Bánk bán.

The theatre became nationalized between 1949 and 1989. The chamber theatre was opened, which was transformed to a children's theatre from 1965. After the theatre building's deterioration worsened in the middle of the 1980s, a 5 year long reconstruction started in 1986, equipping the theatre with a modern orchestra pit and new machinery.

Image Courtesy of Wikimedia and Csörföly Daniel.
Sight description based on Wikipedia.
4

The construction of the Dominican House was started in 1724 as a church, but later the building was converted to an apartment building by the 19th century. There is a pyro-granite plaque on the building's facade with a picture of the old church and a marble plank in the middle of the square that tells about the Dominicans whose history in Pecs dates back to 1288. Now the Dominican House is a cultural centre.
Image Courtesy of Flickr and HorányiMari.
5

The building of the Hattyú House was completed in the 1800s and planned as the "Fehér Hattyú" or the "White Swan" Inn. The story of the place begins with the "Fehér Hattyú Vigadó" Dance Hall building, then the construction was renewed in an eclectic style, when the House received a fine new gateway. There was a period of time in 1809 when the building served as a military hospital. In October 1846 the main dance room of the house hosted Ferenc Liszt's concert. At this concert the audience enjoyed the first performance of the maestro's Hungarian Song sang by the Pécs Choral Society. Nowadays visitors of the hall may see the words "Swan Court" when entering the building and some black letters meaning "Swan" on the main facade. The large wooden door at the main entrance leads you to the beautiful garden where a statue of a sitting woman warmly greets you.
Image Courtesy of Flickr and liz west.
6

A very nice street, in the centre of Pecs. It is the epicenter of restaurants, cafes and little shops. It is a great place for those who enjoy pleasant walks.
Image Courtesy of Flickr and alexbarrow.
7

The Synagogue of Pecs was built in July 1869 according to the design made by Frigyes Feszl Károly Gerster and Lipót Kauser, who played an essential part in Hungarian architecture of the nineteenth century. The Jewish community of Pecs is not numerous, but very unified; they use the Synagogue regularly on weekdays. Jewish religious laws do not agree with metaphorical motifs which is why the main facade of the building of Synagogue is divided into three parts. According to Biblical inscriptions people of any religion may visit the Jewish service. Visitors can see the "stone tablets of Moses" on the top of the façade. The synagogue sanctuary ceiling is covered with painted stars. The sanctuary itself is divided from the nave by the bronze railings and is directed toward Jerusalem.
Image Courtesy of Wikimedia and Csörföly Dániel.
8

The Hild Garden bears the name of József Hild, a Hungarian architect. It is situated inside the Elephant House, the well-known complex of buildings in Pecs. The garden has 3 gates that connect it with the Szécheny and Jókai squares. The Hild Garden is surrounded by apartment buildings and houses of some famous families. One of the houses differs from the others thanks to its convenience for different ages and interests; it was bought in 1816 by the Pecs architect József Piatsek and is situated on the north side of the block.
Image Courtesy of Wikimedia and H. Weinem.
9

The Bath of Pasha Memi is the longest Turkish bath that remained from the times of Turkish rule. The construction was demolished only in 1880, but then renewed by the year 1963. In the 1970s the Turkish bath was opened to the public, housing an exhibition of Turkish historical artifacts. The Turkish aristocracy had a strong tradition of order for the exterior as well as for the interior. They built their mosques to clean the soul and the baths to clean the body. Today visitors may see the reconstructed area of the Turkish spa-room and another showing of Turkish spa history in Hungary.
Image Courtesy of Wikimedia and Csanády.
10

10) The Mosque of Jakovali Hassan Pasha (must see)

The Mosque of Jakovali Hassan Pasha contains a museum inside it. Jakovali Hassan Mosque is the most complete Turkish temple in Hungary. It is a 16th-century mosque with various Muslim religious artifacts. The Mosque was built and established by pasha Yakovali Hassan, and represents the only Turkish age mosque in Hungary that remained intact together with its minaret. It was converted into a Catholic church, but its original Arabic inscriptions inside the niche remain intact.
Image Courtesy of Wikimedia and Váradi Zsolt.
11

The construction of the Bishop's Palace dates back to the twelfth century. Frankish Bishop Bonipert was the first owner of the Palace, but the second resident was Hungarian Bishop Mór. Then, the building was remodeled in Renaissance style, but in the period of Bishop György Klimó, the Palace gained a completely new look. Later, in the nineteenth century, it received some modifications: the second story, the new ornamented facade, the balcony and the statue of Imre Varga were added. The Bishop's Palace is open for visitors in the summer every Thursday.
Image Courtesy of Wikimedia and Csanády.
12

The Pecs Cathedral was built in the eleventh century by Bishop St. Maurice. The building was destroyed and rebuilt several times during wars. It was used as a mosque and was embellished with a minaret (spire) during the Turkish invasion. The current exterior of Neo-Romanesque style was added to the main construction by the end of the nineteenth century. The interior look of the cathedral remained Gothic, with some baroque additions and furnishings. Inside the edifice you can find wonderful frescoes by 19th-century artists Károly Lotz and Bertalan Székely. Visitors to the cathedral may be surprised with organ concerts that are given throughout the year. The square in front of the cathedral and the beautiful park with a magnificent fountain is a popular gathering place. Various folk concerts, dances and fairs are held there also.
Image Courtesy of Wikimedia and Takkk.
13

The early Christian necropolis of Pécs dates to the fourth century when Pecs bore the name of Sopianae. The necropolis is the extraordinary complex of constructions of early Christian art and architecture. The appearance of underground burial chambers and memorial chapels is awe-inspiring. The ancient Roman-Christian remains were unearthed in 1975 when the Szent István Square was undergoing reconstruction. The early Christian necropolis was included in the list of historic-cultural treasures by the World Heritage Committee. Discover the ancient history of a great civilization that still prospers!
Image Courtesy of Flickr and Radu Bucuta.
14

The City Court is another eclectically-styled building that is by Imre Schlauch. It was built in 1891. In times of Turkish rule, the site of the City Court building hosted the bath of pasha Gazi Kaseem, but the location became a prison in 1722. Later, when Civic Casino shareholders bought the site, there was a theatre here. The City Court was constructed only after the theatre's building was demolished.
Image Courtesy of Flickr and korom.