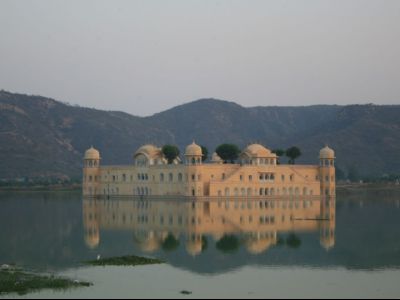 Jal Mahal (meaning "Water Palace") is a palace located in the middle of the Man Sagar Lake in Jaipur city. The palace and the lake around it were renovated and enlarged in the 18th century by Maharaja Jai Singh II of Amber. The Jal Mahal palace has got an eye-popping makeover. Traditional boat-makers from Vrindavan have crafted the Rajput style wooden boats. A gentle splashing of oars on the clear lake waters takes you to Jal Mahal. You move past decorated hallways and chambers on the first floor to climb all the way up to the fragrant Chameli Bagh. Across the lake, you can view the Aravalli hills, dotted with temples and ancient forts, and on the other side, bustling Jaipur.

The most remarkable change is in the lake itself. The drains were diverted, two million tonnes of toxic silt were dredged from the bottom, increasing its depth by over a metre, a water treatment system was developed, local vegetation and fish reintroduced, the surrounding wetlands regenerated and five nesting islands created to attract migratory birds.
Image by Poco a poco on Wikimedia under Creative Commons License.
Sight description based on wikipedia

Want to visit this sight? Check out these Self-Guided Walking Tours in Jaipur. Alternatively, you can download the mobile app "GPSmyCity: Walks in 1K+ Cities" from iTunes App Store or Google Play. The app turns your mobile device to a personal tour guide and it works offline, so no data plan is needed when traveling abroad.