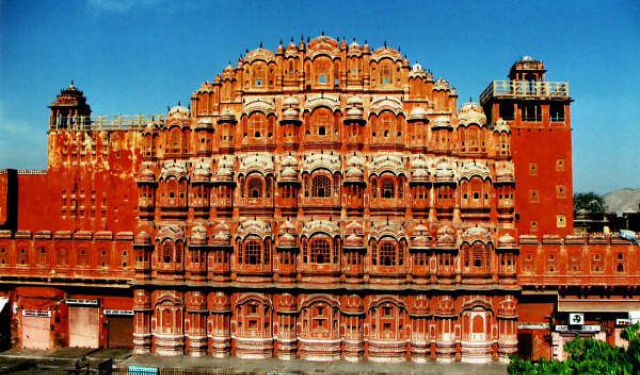 Jaipur is also known as the Pink City because of the many pink sandstone buildings around. These beautiful buildings help make Jaipur one of India’s most impressive places. There are plenty of other great landmarks around the city that you can see using our Landmarks Walking Tour.
Image Courtesy of Wikimedia and Kevin Sorbo.
How it works: Download the app "GPSmyCity: Walks in 1K+ Cities" from iTunes App Store or Google Play to your mobile phone or tablet. The app turns your mobile device into a personal tour guide and its built-in GPS navigation functions guide you from one tour stop to next. The app works offline, so no data plan is needed when traveling abroad.

The Birla Mandir Temple is a sacred place for Hindus. Also known as the Laxmi Narayan Temple, it is dedicated to Lord Laxmi Narayan. This contemporary temple attracts many visitors, especially at night when its white marble exterior is magnificently illuminated. Look closer to see scenes from Hindu mythology painted on the windows, as well as marble idols and sculptures.
Image Courtesy of Wikimedia and Justin Gaurav Murgai.
2

The Rambagh Palace is the former residence of the Maharaja of Jaipur and now a luxury Taj Palace Hotel, located 5 miles (8.0 km) outside of the walls of the city of Jaipur on Bhawani Singh Road. Preferred by celebrities and sport stars across the globe, Rambagh Palace, is widely considered to be one of the best hotels around the world.

The first building on the site was a garden house built in 1835 for the wet nurse of prince Ram Singh II. In 1887, during the reign of Maharaja Sawai Madho Singh, it was converted into a modest royal hunting lodge, as the house was located in the midst of a thick forest at that time. In the early 20th century, it was expanded into a palace. Maharajah Sawai Man Singh II made Rambagh his principal residence and added a number of royal suites in 1931.

After India became independent and the princely states united, the Palace became the Government House. By the 1950s, the royal family felt that the upkeep of the palace and its 47 acres (190,000 square meters) of gardens was becoming very costly. They, therefore, decided in 1957 to convert it into a luxury hotel.

Image Courtesy of Flickr and mckaysavage.
Sight description based on Wikipedia.
3

Set within the Birla Science & Technology Center, the Birla Planetarium is one of the most prominent landmarks in Jaipur. This modern, fully equipped facility has amazing audio-visual displays that show visitors the mysteries of cosmos in an amazing and creative way.
Image Courtesy of Flickr and Brian Arrr.
4

Raj Mandir Cinema is a famous movie theater in Jaipur. Situated on the Bhagwan Das Road, the meringue-shaped auditorium opened in 1976, and over the years has seen many movie premieres of Hindi films, and has become a popular symbol of Jaipur, it is often referred as the Pride of Asia. It opened on 1 June 1976 with the film "Bazigar".Cinema was designed by architect W.M. Namjoshi in Art Moderne style (Streamline Moderne or late Art Deco). Known for its large size as well as opulent and meringue interiors, Raj Mandir remains an important part of the tourist circuit, and thus usually remains full despite its size.
Image Courtesy of Wikimedia and lawtonjm.
Sight description based on Wikipedia.
5

Image Courtesy of Wikimedia and Ksheer.
Sight description based on Wikipedia.
6

The Jantar Mantar is a collection of architectural astronomical instruments, built by Maharaja (King) Jai Singh II at his then new capital of Jaipur between 1727 and 1734. It is modeled after the one that he had built for him at the Mughal capital of Delhi. He had constructed a total of five such facilities at different locations, including the ones at Delhi and Jaipur. The Jaipur observatory is the largest and best preserved of these. It has been inscribed on the World Heritage List as "an expression of the astronomical skills and cosmological concepts of the court of a scholarly prince at the end of the Mughal period".

The observatory consists of fourteen major geometric devices for measuring time, predicting eclipses, tracking stars' location as the earth orbits around the sun, ascertaining the declinations of planets, and determining the celestial altitudes and related ephemerides. Each is a fixed and 'focused' tool. The Samrat Yantra, the largest instrument, is 90 feet (27 m) high, its shadow carefully plotted to tell the time of day.
Image Courtesy of Wikimedia and Knowledge Seeker.
Sight description based on Wikipedia.
8

Jaipur is also known as the Pink City because of its many attractive rose-colored buildings. One of these pretty sights is the Jorawar Singh Gate, which is also a great example of Indian architecture. Named after a general, this gate is the entryway to the northern area of the city, acting as a beautiful introduction to a walk around this part of town.
Image Courtesy of Flickr and Allan Grey.