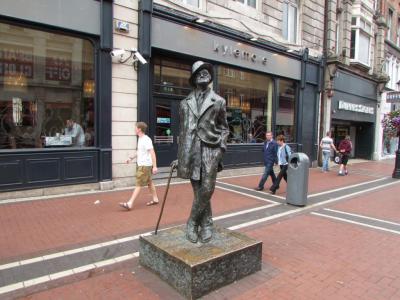 Largely regarded as one of the most influential writers in the modernist avant-garde of the early 20th century, the Irish novelist and poet James Joyce (2 February 1882 – 13 January 1941) went down in history primarily as the author of Ulysses (1922), a landmark novel which perfected his stream of consciousness technique and combined nearly every literary device available in a modern re-telling of The Odyssey.

Although the author spent much of his adult life overseas, he wrote prolifically about his home land and had his fictional universe centred on Dublin, the city of his birth. Shortly after the publication of Ulysses, Joyce elucidated his preoccupation somewhat, saying, "For myself, I always write about Dublin, because if I can get to the heart of Dublin I can get to the heart of all the cities of the world. In the particular is contained the universal."

Both his short story collection, Dubliners, and his seminal work, Ulysses, are set in Dublin, making its heart an ideal setting for him to be immortalised. As a token of appreciation for Ireland’s most enigmatic author, a life-sized brass statue of James Joyce was unveiled in North Earl Street, Dublin in 1990, sculpted by Marjorie Fitzgibbon.
Image Courtesy of Wikimedia and Pmk58.
Sight description based on Wikipedia.