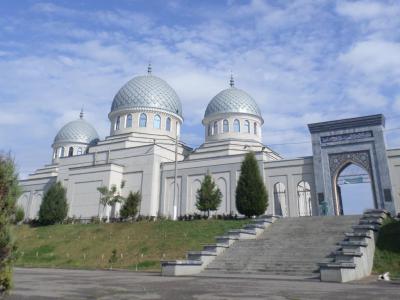 Mosque Khoja Ahrar Vali or Jami Mosque is the basis of the Registan ensemble in the area of ​​Chorsu square. The only Tashkent example of the Friday mosque of the yard type, common in Central Asia in the late Middle Ages.

The main building has the shape of a cube covered with a dome with four windows in a low cylinder. On the eastern wall, facing the courtyard, there is a large arch cut through. The border of arches and niches at the entrance is lancet, which is not typical for the Central Asian outline, rather Gothic. The layout of the mosque is rectangular with a large building at the end of the east-west longitudinal axis.

Ubaydulla Ahrar , the great master of Sufism , the head of the Muslim clergy, in preparation for the move, ordered the construction of a large Friday mosque and madrasah in the ancient Tashkent mahalla Gulbazar. Local legends say that Ubaydulla got the money for the construction from the sale of “cutting threads”, which remain after cutting the fabric into standard pieces.

The main Friday mosque was built on a hill; therefore it was possible to see this majestic building from a great distance. From that time to the present day, people call this mosque, the mosque of Ubaydulla Ahror , in memory of him.

In 1868 the mosque was severely damaged by a devastating earthquake. By 1888, the Juma Mosque was repaired with the participation of Russian engineers. Funds for repairs, in the amount of 15,000 rubles, were taken from a gift from the Emir of Bukhara Muzaffar made to Emperor Alexander III on the occasion of his coronation in 1883 . The grand opening of the renovated Juma Mosque took place in July 1888.

In Soviet times, various state organizations were located here: the department of the Ministry of Education, other state institutions and even a cinema.

The last restoration of the Khoja Ahrar Vali Mosque was carried out in the 1990s. The building was recognized as emergency and it was completely rebuilt by modern architects, the cube was demolished, and instead of one dome, now there are three of them.

In 2003, the mosque was rebuilt on the same site using modern construction and decoration methods.
Image Courtesy of Wikimedia and Bobyrr.