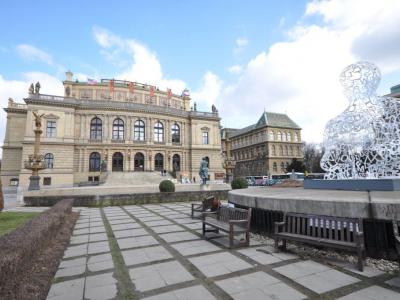 Compared to other squares in Prague, Jan Palach Square is relatively new. Found on the right bank of the Vltava river within the Old Town, not far from the Jewish Quarter, it was named the Square of the Red Army in commemoration of the Russian soldiers who fell liberating Prague in 1945. Between 1969 and 1970 the square was rather tentatively renamed Jan Palach Square after the young student who committed suicide by self-immolation in protest against the Soviet occupation of his country. The name stuck and was officially adopted at the end of 1989 after the Communist regime came to an end.

The West side of the square, adjacent to the river, affords a great view of the Charles Bridge and Prague Castle. Through the Mάnes Bridge it is connected to the Lesser Town.

To the North of the square, you can see the Rudolfinum Concert Hall and Art Gallery, and to the South – the Academy of Arts, Architecture and Design. On the East side stands the Charles University Faculty of Arts.

In front of the Rudolfinum there is a statue of the Czech composer Antonin Dvorak, and by the river you will find a statue of Josef Mάnes, the Czech painter who is best known for the beautiful images of the twelve months (Calendar plate) that he painted for the Astronomical Clock in 1870. As for Jan Palach, a commemorative plaque to him is found in Wenceslas Square.
Image by Jorge Láscar on Flickr under Creative Commons License.
Sight description based on wikipedia