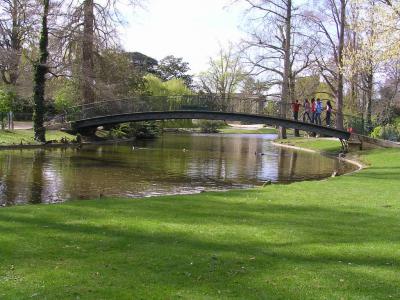 The Jardin Public was first landscaped in 1755, to offer a space for leisure and relaxation to the citizens of Bordeaux. It remains the largest public open space in the city center, and becomes very much the heart of the city during the warm summer months.

The park was constructed using waste ground between three distinct village areas – Bordeaux itself, Saint-Seurin to the north, and Chartrons to the west. The completion of the Jardin Public was a major step in turning Bordeaux into a cohesive urban area. Designed by architects Voisin and Gabriel, the park was laid out in the French style, but was transformed following the French Revolution.

The traditional French gardens were totally renewed under Napoleon III’s reign, becoming a formal English garden, known as the Champ de Mars. This is the place where official ceremonies took place within Bordeaux during the early days of Republican France. The Jardin Public still exists in this form, with the adjacent Botanic Garden moving next door to the park in 1855.

The park is surrounded by elegant 19th century mansions, and split by a stream that runs down to the Garonne. The stream is crossed by a wrought iron bridge, a popular spot to see swans and ducks.
Image by Grand Parc - Bordeaux, France on Wikimedia under Creative Commons License.