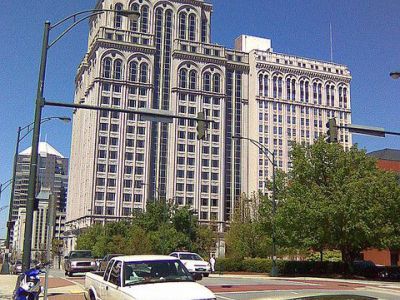 The Jefferson Standard Building is a 233 ft (71m) skyscraper in Greensboro. It was completed in 1923 as the headquarters for Jefferson Standard Life Insurance Co (now known as Lincoln Financial Group) and has 18 floors. Until it was superseded by the Nissen Building in Winston-Salem in 1927, it was the tallest building in North Carolina (succeeding the Independence Building in Charlotte) and the tallest building between Washington, D.C. and Atlanta, Georgia. It was named to the National Register of Historic Places in 1976. A 20-story addition first known as the Jefferson-Pilot Building and later the Lincoln Financial Building was finished in 1990.

Julian Price, president of Jefferson Standard Life Insurance, asked New York City architect Charles C. Hartmann to design his company's new headquarters. Price paid for the building in full because he did not believe in debt. The Jefferson Standard Building copied the Equitable Building in its use of a U-shape allowing more light and air into more of the building. The exterior is terra cotta and granite. Architectural styles include Neo-Gothic, Neo-Classical and Art Deco. The terra cotta tile facade incorporates Beaux-Arts and Romanesque characteristics. Above the doorway is a bust of Thomas Jefferson, for whom the company was named, with Buffalo nickels on either side of ground floor windows to represent thrift and economy.
Image Courtesy of Flickr and Justin Ervin.
Sight description based on Wikipedia.