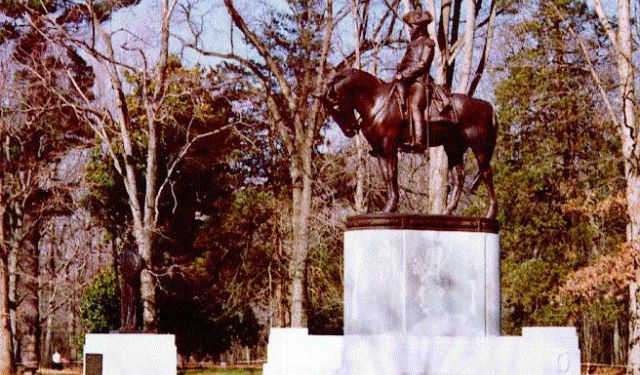 Image by Wahkeenah on Wikimedia under Creative Commons License.

Greensboro is where the American Civil Rights Movement began, something immortalized in the city’s numerous monuments and statues. Greensboro is also where famous writer O. Henry was born. In this city you will find additional public artwork, sculptures and monuments to distinguished American figures. Take the following tour to discover the most fascinating statues and monuments Greensboro has to offer.
How it works: Download the app "GPSmyCity: Walks in 1K+ Cities" from iTunes App Store or Google Play to your mobile phone or tablet. The app turns your mobile device into a personal tour guide and its built-in GPS navigation functions guide you from one tour stop to next. The app works offline, so no data plan is needed when traveling abroad.

The bust of Dr. Martin Luther King, Jr. was installed in honor of the famous leader of the African American Civil Rights Movement in the United States, known for his non-violent methods of protest inspired by Mahatma Gandhi. Sculpted by Wilbur Lee Map, this bronze bust was unveiled in 1994, capturing the face of Dr. King in his final hour of life. The monument is located at the intersection of Dr. Martin Luther King, Jr. Drive and South Elm Street.
Image by Joel Gillespie on Flickr under Creative Commons License.
2

Nathanael Greene was a legendary major general of the Continental Army in the American Revolutionary War, and the person after whom the city was named. This life-size bronze statue was created by artist Jim Barnhill and installed at the roundabout of Greene and West McGee Streets in 2008. A plate on the pedestal features a quote by Marquis de Lafayette: "In the very name Greene are remembered all the virtues and talents which can illustrate the patriot, the statesman, and the military leader."
Image by Joel Gillespie on Flickr under Creative Commons License.
3

Millennium Gate, unveiled in 2002, has become one of Greensboro’s most notable landmarks. Installed at the Municipal Office Building on West Washington Street, it was created by Jim Gallucci, a famous Greensboro artist. This bronze sculpture was inspired by the world’s greatest events, inventions and figures of the last millennium.
Image by Justin Ervin on Flickr under Creative Commons License.
4

One of Greensboro’s most unusual and fascinating sculptures, the News & Record Bench consists of a bronze bench made of sheets of newspaper, magazines and boxes. The newspaper even has articles printed on it. Created by famous Greensboro artist Jim Gallucci, sculptor of many notable city monuments, it is located outside the News & Record corporate office on East Market Street.
Image by aliluyya on Flickr under Creative Commons License.
5

Walking down North Elm Street you will notice a huge stone book. It is a monument to the famous writer William Sydney Porter, commonly known as O. Henry. His life was short and much of it was spent in Greensboro. The monument depicts two of his stories, “The Gift of the Magi” and “The Ransom of Red Chief,” with the sculpture of a young boy peeping out through the pages. Created by artist Maria J. Kirby-Smith and unveiled in 1985, a few steps from the book you will find a life-size statue of O. Henry and his beloved dog.
Image by JuralMS on Flickr under Creative Commons License.
6

Metaphor, a famous work by artist Ogden Deal, is a twelve foot steel statue of a human figure stretching out its hands to the sky. Standing for nearly forty years, the statue is sponsored by the Greensboro Youth Council and installed on Youth Square at the intersection of Summit Avenue, East Lindsay Street and Church Court.
Image by Vix Walker on Flickr under Creative Commons License.
7