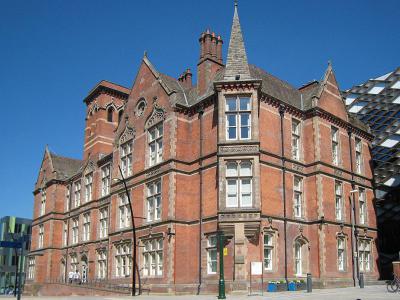 The Jessop Hospital for Women was opened in 1878 with funds from Thomas Jessop, a wealthy steelworks-owner. The architect was John Dodsley Webster. It was built to replace the old Sheffield Hospital for Women, which had only nine beds. The building cost £26,000 - a lot of money at the time - all paid for by Jessop. Initially it had fifty-seven beds, and was built in the classic Gothic Revival style. In 2007 the majority of the 1970s wing was demolished in advance of re-development by the University of Sheffield as part of their Jessop West development. The Victorian Wing of the original hospital is being converted to house the Department of Music (Architects Carey Jones), whilst a new building (Jessop West) will be 7 stories high and house the English, History and Modern Languages departments of The University of Sheffield. The new building is designed by Sauerbruch Hutton from Berlin (their first major UK building) together with RMJM as executive architects and Arup as engineers.
Image by yellow book on Flickr under Creative Commons License.
Sight description based on wikipedia