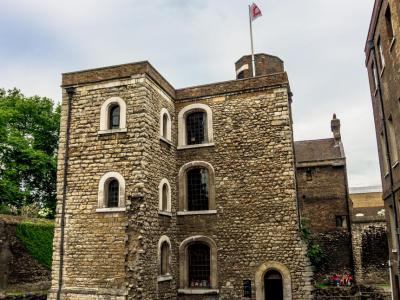 The Jewel Tower is a three-story building standing right opposite the Houses of Parliament. This is one of the two surviving parts of the ancient Palace of Westminster. Separated by high walls and a moat that once ran into the Thames and was used for fishing, this tower was unharmed by the great fire that destroyed most of the palace in 1834.

The tower was built originally in the 1360s as a storehouse for the private treasures of King Edward III and was nicknamed the "King's Privy Wardrobe." The unusual L-shape design of the building is attributed to the fact that King Edward wanted it to take no space in his garden.

Later, in the early 17th-century, it was converted to store records of the House of Lords. Among these documents are some truly historic ones, like the execution order of Charles I. In 1869, the Standard Weights and Measures Department took over the building. Its thick medieval walls provided ideal setting for precise measurements.

Unlike the much popular Jewel House at the Tower of London – home to the British Crown jewels, the Jewel Tower of Westminster is a hidden gem that is largely overlooked by millions of tourists visiting here each year. Simultaneously with the Jewel Tower's construction, another tower was built nearby, designed to accommodate a 4-ton bell called "The Edward", a forerunner to Big Ben. That clock tower remained in place until 1698, standing on the north side of New Palace Yard, a little to the west of where the present clock tower is located.
Image by Kurt Bauschardt on Flickr under Creative Commons License.