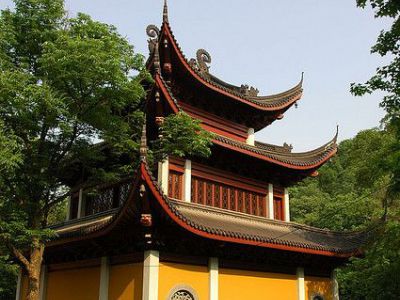 Jingci Temple is located at the foot of Huiri Peak of Nanping Hill. It is the second prominent Buddhist temple around West Lake. Together with Lingyin Temple, it is called the jewel of the southern and northern hills. The temple was claimed as a national key Buddhist temple in Han's area by state council in 1983.

Jingci Temple was initially called "Huiri Yongming Temple". It was first built in AD 954 by Qian Hongji of Wuyue Dynastry for a famous monk Yongming Yanshou. In South Song Dynasty, its name was changed to Jingci Temple, and the 500 Luohan Hall was built. The temple was destroyed and rebuilt several times in the history. The majority of present temple was built in 1980's. Specially, there is a newly forged copper bell, weighing over 100 Kilograms. On it carved The Lotus Sutra, with 68,000 characters. It hosts one of Ten Scenes of West Lake, "Evening Bell Ringing at the Nanping Hill".
Image Courtesy of Flickr and gongfu_king.
Sight description based on Wikipedia.

Want to visit this sight? Check out these Self-Guided Walking Tours in Hangzhou. Alternatively, you can download the mobile app "GPSmyCity: Walks in 1K+ Cities" from iTunes App Store or Google Play. The app turns your mobile device to a personal tour guide and it works offline, so no data plan is needed when traveling abroad.