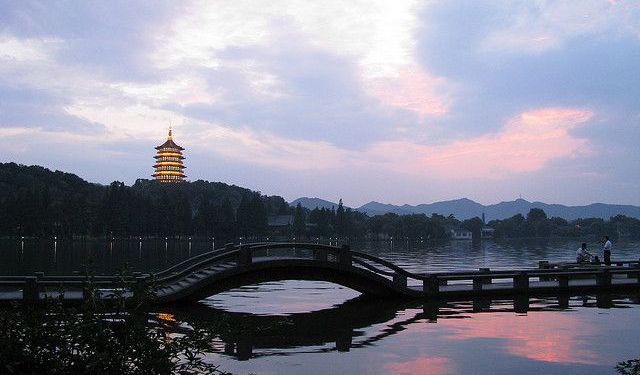 The city of Hangzhou, sitting on the southern end of the Grand Canal waterway in China, opposite Beijing on the northern end, is an agglomeration of cultural and historic sights. Western Hangzhou is a home to the West Lake which has inspired poets and artists since the 9th century. It also hosts a number of other attractions, such as Yue Fei Temple, Hangzhou Botanical Garden, Zhejiang gallery, China Seal Museum and more, each unique in their own way and telling a fascinating story of Hangzhou and Chinese civilization. Take this self-guided tour and enjoy!
Image Courtesy of Flickr and Pedronet.
How it works: Download the app "GPSmyCity: Walks in 1K+ Cities" from iTunes App Store or Google Play to your mobile phone or tablet. The app turns your mobile device into a personal tour guide and its built-in GPS navigation functions guide you from one tour stop to next. The app works offline, so no data plan is needed when traveling abroad.

The Hangzhou Public Garden is a relaxing place to spend some time. Children and adults enjoy their weekends and evenings surrounded by warm colors, bird songs and the beauty of nature. It has a playground for kids and small cafes to soak up the atmosphere with a cup of coffee.
Image Courtesy of Flickr and beggs.
2

Hangzhou Botanical Garden, built in 1965 at the foot of Jade Spring Hill, is a recreational area for kids and adults, as well as a research base dedicated to the cultivation of plants, and protecting and studying the environment. It houses beautiful decorative arrangements, and has stunning architecture, with pavilions and kiosks adorned in exotic plants. It also contains the Garden of Economy Plant, Plant Resource Museum, Medicinal Plants and other sections. Kids will love playing and exploring in the Bamboo Garden.
Image Courtesy of Flickr and acoillet.
3

The Yue Fei Temple or commonly known in Chinese as Yuewang Temple is a temple built in honor of Yue Fei, a general of the Southern Song dynasty when the capital of China was in Hangzhou. The temple ground is located near the West Lake, in central Hangzhou. The temple was first constructed in the during the Song Dynasty in 1221 to commemorate Yue Fei.. The site includes Yue Fei's Temple, Loyalty Temple and Yue Fei’s Mausoleum inside. The temple was reconstructed several times in later date. The tombs and the tomb sculptures in the temple all dates from the 12th century, and have been meticulously restored.
Image Courtesy of Flickr and livepine.
Sight description based on Wikipedia.
4

The Xiling Bridge stretches across the Xihu, passing through Beishan Mountain. Located on an isolated hill on the northwest side of the mountain, it has three large sweetheart bridges that unite into one. It is dedicated to a geisha from the Qian Tang Dynasty who was killed for humiliating officials and was buried at the ends of Xiling.
Image Courtesy of Flickr and Faunubes.
5

The statue of Qiu Jin is dedicated to a revolutionary woman, feminist and writer. She was also an orator, speaking up for womens rights, including freedom of marriage and education. A member of a resistance group opposed to the Qing Empire, she was arrested, tortured by officials and executed at the age of 31. Her ideas and dedication to literature have preserved her place in Chinese history ever since.
Image Courtesy of Wikimedia and Deliberately.
6

Baochu Pagoda is located just north of the lake on top of Precious Stone Hill. Its small base supports seven stories (45 meters) and gives it a distinctively slender and elegant appearance. The name Baochu, translated directly, means "protect Chu", who, legend has it, refers to Qian Chu, the last king of Wuyue. As the story goes, one of King Chu's ministers had the temple constructed for prayers to be said for his safe return from a trip he had taken to Kaifeng, in central China. He had been summoned there by the Emperor and had been gone many days with no news of his return.

Baochu Pagoda was originally constructed in 963 and stood nine stories tall. Its most recent reconstruction, in 1933, left it slightly shorter, seven stories, and it has most recently had its lantern replaced on its top, though its previous one is on display near the pagoda. It is constructed of brick and stone and contains no internal staircase. The tower lies next to a path that runs the length of West Lake's northern mountain range and is accessible by both dirt paths and cement stairs from nearly every side of the mountain.

Image Courtesy of Flickr and jaaron.
Sight description based on Wikipedia.