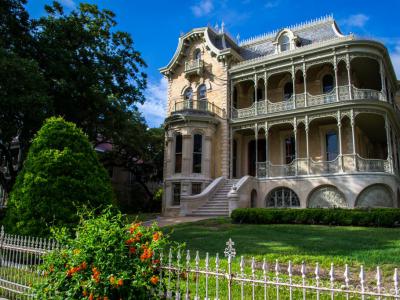 The John Bremond House is part of Bremond Block Historic District - a collection of eleven historic homes in downtown Austin, constructed from the 1850s to 1910.

The block was added to National Register of Historic Places in 1970, and is considered one of the few remaining upper-class Victorian neighborhoods of the middle to late nineteenth century in Texas. Six of these houses were built or expanded for members of the families of brothers Eugene and John Bremond, who were prominent in late-nineteenth-century Austin social, merchandising, and banking circles. They are located within the square block bordered by West Seventh, West Eighth, Guadalupe, and San Antonio streets. The district also includes several houses on the west side of San Antonio and the south side of West Seventh, at least three of which were built or altered by the North family.
Image by TaylorPeres on Wikimedia under Creative Commons License.
Sight description based on wikipedia