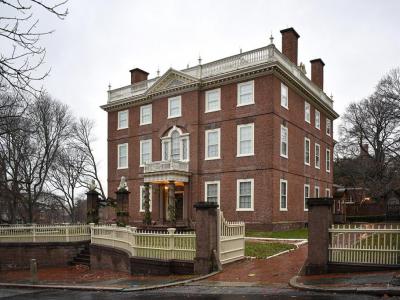 The John Brown House is the first mansion built in Providence. It is located along Power Street on College Hill, which is adjacent to the borders of Brown University. The house is named after the original owner and one of the early benefactors of the University, the early American merchant and statesman John Brown. It was declared a National Historic Landmark in 1968.

John Quincy Adams considered the house "the most magnificent and elegant private mansion that I have ever seen on this continent." The original structure was built in 1786 by John Brown. Notable guests during this time include George Washington, who is reported to have visited for tea. The house was sold in 1901 to the prominent Rhode Island industrialist and banker Marsden J. Perry. Under Marsden's supervision, the extension was renovated to add in modern bathrooms and central heating systems.

In 1942, the Brown family donated the house to the Rhode Island Historical Society for preservation. The house was restored to its original colonial decor. The museum now contains many original furniture pieces provided by the Brown family estate.

This sight is featured in a self-guided walking tour of Providence, Rhode Island within the mobile app "GPSmyCity: Walks in 1K+ Cities" which can be downloaded from iTunes App Store or Google Play. Please download the app to your mobile phone or tablet for travel directions for visiting this sight. The app turns your mobile device to a personal tour guide and it works offline, so no data plan is needed when traveling abroad.