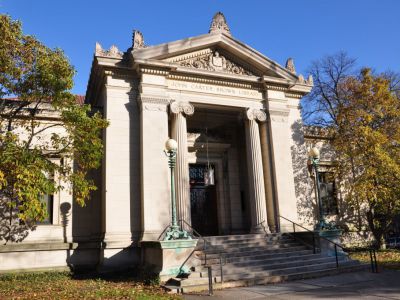 The John Carter Brown Library, founded in 1846, is administered separately from the Brown University, but has been located on the Main Green of the campus since 1904. It is generally regarded as the world's leading collection of primary historical sources pertaining to the Americas before 1825. It houses a very large percentage of the titles published before that date about the discovery, settlement, history, and natural history of the New World.

The "JCB", as it is known, publishes Bibliotheca Americana, the main bibliography in the field. Typical of its noteworthy holdings is the best preserved of the seven surviving copies of Bay Psalm Book, the first extant book printed in British North America. There is also a very fine Shakespeare First Folio, added to the collection by John Carter Brown's widow (a Shakespeare enthusiast) on the grounds that it includes The Tempest, a play set in the New World.

The JCB holdings comprise more than 50,000 early titles and about 16,000 modern books, as well as prints, manuscripts, maps, and other items in the library's specialty. The library occupies a Beaux-Arts style building designed by Shepley, Rutan, and Coolidge. The 1904 edifice was expanded in 1990 by architects Hartman-Cox of Washington, D.C.

Opening hours: Monday to Friday: 9am - 5 pm, Thursday: until 7:00.
Image Courtesy of Wikimedia and chensiyuan.
Sight description based on Wikipedia.