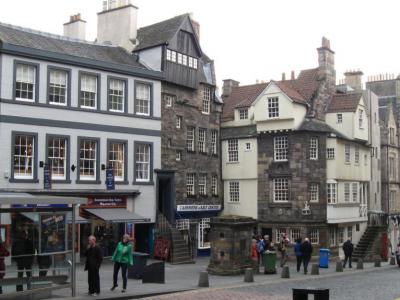 House museums are always interesting to visit, not only because you get a fascinating insight into the lives of the building’s former occupants, but also because you can see what things were in fashion back in the day. John Knox House is no exception.

Built around 1490, this is the oldest house on the Royal Mile. It has wonderful hand-painted ceilings, oak beams and wooden galleries. Today it is owned and managed by the Church of Scotland, but previously it belonged to James Mossman, who was a royal goldsmith. He fashioned the crown for Mary, Queen of Scots, and later, the crown for her son, King James VI of Scotland.

Whether John Knox, the 16th century Protestant Reformer, actually ever lived here is debatable, but the house, which had become badly dilapidated, was saved from demolition in the 18th century by the Society of Antiquaries of Scotland, who put about the rumour that this had been Knox’s home before he died.

The house museum is a great place to visit for anyone who is interested in religious history as there are many manuscripts and artefacts from the Reformation period, including papers placed in a time capsule by Knox.

The museum is part of the Scottish Story-Telling Centre, and the history of Knox, Mossman and life in Edinburgh before and after the Reformation are related by guides in dress costume. There is a special room for children, full of puzzles, where they can dress up as John Knox.