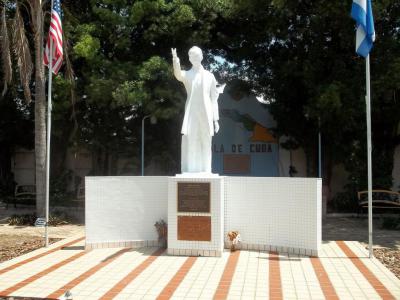 This tiny park is situated on the corners of East Eighth Avenue and North 13th Street in Historic Ybor. In a strange twist of history, the park actually belongs to Cuba, so in the technical sense, when you cross the pathway into the park, you are stepping onto Cuban soil! The small plot was donated to Cuba in 1956, three years before the communist revolution. Since then, the property has been maintained by local Cuban historical groups.

The property was donated to the island by resident and prominent Cuban revolutionary Paulina Pedroso. Pedroso ran a boarding house on this site, where Jose Marti stayed during his visits to the Tampa area. Marti stayed here while recovering from the attempt on his life in 1892.

In the park today, you'll find monuments honoring Marti and Jose Antonio de la Caridad Maceo y Grajales, along with statues and a mural. Parts of this park contain soil imported from each of Cuba's provinces. It's a small park that will only take a few minutes to visit, but the history of the place is impressive for its small size.
Image Courtesy of Wikimedia and Ebyabe.