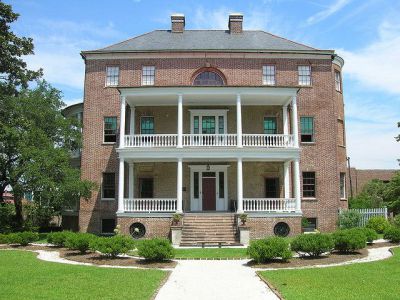 Owned and operated by the Charleston Museum, the unique Manigault House is one of the city's most popular historic houses. Built in 1803 and designed by Gabriel Manigault to be the home of his brother, it is nationally significant as a well-executed and preserved example of Adam-style architecture. A semicircular stairwell projects from one sidewall, and a bowed porch from the other, giving the house the shape of a parallelogram. The gatehouse near the entrance makes for a great conversation piece – another example of a wealthy homeowner (in this case, a rice planter) one-upping his neighbors.

As a whole, the structure and its gatehouse have been initially dubbed an architectural folly. A bigger folly, however, almost occurred in 1920 when it was threatened with demolition to make way for a gas station. Fortunately, a preservation group was organized to stop that from happening. The group would become the Preservation Society of Charleston.

The 45-minute tour of the interior is enlightening as it explains why the house was built the way it was; as a plus, you'll get to see the delicately refined woodwork in the fireplace mantels, door and window moulding, and cornices, reflective of the style promoted by Robert Adam, which differentiated the scale of these elements in domestic and civic architecture.

Why You Should Visit:
This is where you go if you are an architecture fan, not an artifact lover. The fine detail in this house will delight and amaze!