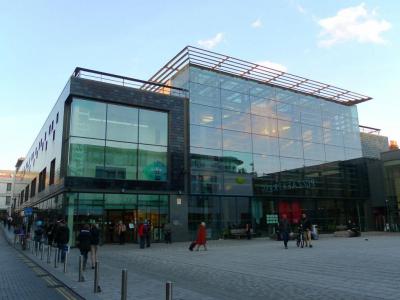 Jubilee Library is the main public library serving the English city of Brighton and Hove. It forms the centrepiece of the Jubilee Square development in central Brighton—a £50 million scheme to regenerate a 40-year-old brownfield site. Opened in 2005 by the Princess Royal and subsequently visited by Queen Elizabeth II, the library has won many design awards and has been described as "a triumph", "the most important public building constructed in Brighton since the Royal Pavilion" and "the superhero saved the city". In terms of visitor numbers and loans, the library is one of the busiest in England.

Before 2005, the seaside resort of Brighton did not have a purpose-built central library, but there had been attempts to create one for more than a century. The new library, the first part of the Jubilee Square scheme to be finished, was ready on time and on budget in 2005, and superseded a temporary library which had replaced the 100-year-old facilities in 1999. The new library brings together facilities previously housed in separate sites, and offers extensive IT facilities, a large LGBT literature collection and various social and community activities. Several pieces of art were commissioned for the building and its environs. The building has been described as one of the most energy-efficient structures in England—its carbon footprint is half that of a traditional public building of comparable size, and natural energy is used throughout.