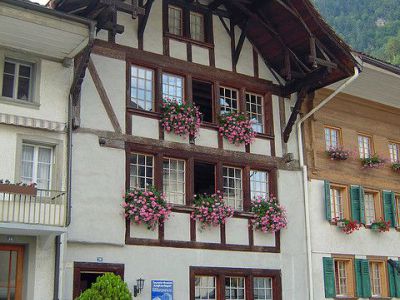 The Jungfrau Region Tourism Museum is the only museum exclusively dedicated to the history of tourism in the Alpine region. The museum was opened in 1980 to display the hundreds of years of development in tourism of the region.

The building that now contains the Jungfrau Region Tourism Museum was previously home to the parish priest. This house was built in 1630 and served as both a home and an inn for travelers. Renovations took place in 1979 in preparation for the opening of the museum.

The museum offers three floors of exhibits that focus on eight primary areas of tourism. These areas are discovery of the Alps, steam ships and railways, the hotel industry, road traffic, winter sports, the souvenir business, constructing the mountain railways and Alpinism. The newest exhibits show how the railroad helped to boost tourism and how winter tourism became popular.

A popular exhibit in the Jungfrau Region Tourism Museum is Goethe's 2nd Trip to Switzerland. This exhibit takes patrons on the journey with him. Using personal letters and diary entries, the museum attempts to recreate some of the experiences Goethe had on his visit to the country.

Objects and artifacts within the museum are mostly photos and maps. There is also a model of the first steam engine train, the Bellevue. The museum contains a large number of winter sports equipment and memorabilia as well.

The museum is located on the northwest side of the Aare River. It is an easy walk across the pedestrian-friendly streets from central Interlaken to the museum's location in Unterseen.

Tips:
The museum is closed on Mondays and Tuesdays. During the remainder of the week, Jungfrau Region Tourism Museum is open from 2 PM to 5 PM.
Image Courtesy of Flickr and Oncle Bernard on flickr.com.

Want to visit this sight? Check out these Self-Guided Walking Tours in Interlaken. Alternatively, you can download the mobile app "GPSmyCity: Walks in 1K+ Cities" from iTunes App Store or Google Play. The app turns your mobile device to a personal tour guide and it works offline, so no data plan is needed when traveling abroad.

The city was originally called Aarmuhle due to its location on the Aare River. The name was changed to Interlaken in 1891. Even before the name change, the area was popular with tourists. At the...  view more