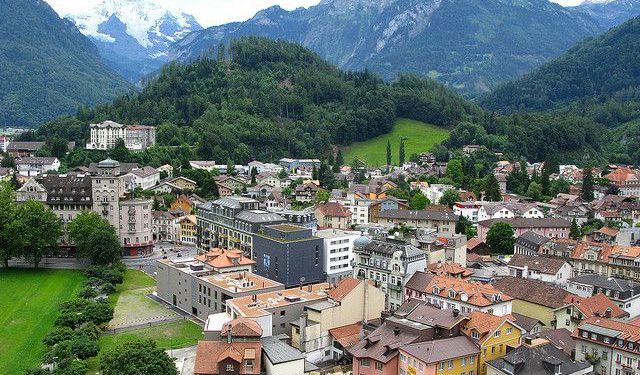 The city was originally called Aarmuhle due to its location on the Aare River. The name was changed to Interlaken in 1891. Even before the name change, the area was popular with tourists. At the beginning of the 19th century, Swiss landscape artists flocked to the area that would become Interlaken for inspiration. These landscapes drew wealthy visitors for the beautiful views of the mountains and well-known spa treatments.

Tourists flocked to the city with the introduction of the railway system. Hotels grew throughout the small town giving the area a heavy focus on tourism. The Jungfrau Region Tourism Museum shows the growth of tourism in the area in a way that cannot be found elsewhere.

There are many unique sights to see in Interlaken. Hoheweg Boulevard with its numerous shops and gardens is a primary stop for most visitors on walking tours. The Japanese Garden, Hohematte Park and the Swiss Chocolate Chalet are just some of the wondrous places to stop while exploring the city.

Take this self-guided tour to enjoy the highlights of Interlaken, Switzerland.
Image Courtesy of Flickr and Dave-F.
How it works: Download the app "GPSmyCity: Walks in 1K+ Cities" from iTunes App Store or Google Play to your mobile phone or tablet. The app turns your mobile device into a personal tour guide and its built-in GPS navigation functions guide you from one tour stop to next. The app works offline, so no data plan is needed when traveling abroad.

Hoheweg Boulevard is a notable street in Interlaken. It runs east to west from Lanzenan to Harderstrasse following the geographical curve of the Aare River. Visitors to Interlaken should seek out Hoheweg Boulevard for easy access to various spots in the city, plenty of shopping opportunities and dining options.

Some of the notable locations along Hoheweg Boulevard include Interlaken Centre, the Swiss Chocolate Chalet and numerous gardens. The gardens include the English Garden, the Japanese Garden and Schlosspark.

The Hohe Promenade is a smaller, quieter street that circles back to Hoheweg Boulevard. Visitors can stop to take in the serenity of the Mersmann-Brunnen fountain before they return to the busier boulevard.

Hoheweg Boulevard is a good, central point for a walking tour of the city. Visitors will find that their favorite spots, like Casino Interlaken and Hohematte park are only minutes away by foot.

Built in 1995, Japanese Garden was the first Japanese garden in the city. The garden includes a Shinji pond and a pavilion. It is designed to remind the people of Interlaken of the environment of Lake Biwa, near Otsu. The garden features cranes, turtles, numerous trees and a memorial plaque.

The location of Japanese Garden allows for stunning views of the Reformierte Schlosskirche. It is a unique area in the center of the city with a vision of the Alps looming over a traditional Japanese pagoda.

The garden is open 24 hours, seven days per week. It is conveniently located between Hoheweg Boulevard and Schosstrasse with many shopping and dining places located nearby. Visitors can plan a quick stop to see the unique park or choose to linger as they take in the serenity of the Garden of Friendship.
Image Courtesy of Wikimedia and InSapphoWeTrust.
3

Schlosskirche, sometimes called Reformierte Schlosskirche or "the reformed church," is one of the oldest building in Interlaken. Originally an Augustinian monastery, the castle church was built in 1133. Today, Schlosskirche is used as a convent and is one of the city's most visited places.

It wasn't until the 19th century that Schlosskirke was used as a church again. The church was restored with the aid of architect Adolf Muhlemann and re-dedicated in 1911.

Visitors to Interlaken can tour Schlosskirche to see the beautiful stained glass windows, the private garden and the medieval clock, which tolls on the hour. Church services are held every Sunday at 10 AM.
Image Courtesy of Wikimedia and Dietrich Michael Weidmann.
4

Chocolate lovers will love the Swiss Chocolate Chalet on Hoheweg Boulevard. The store is located in the midst of the main boulevard in Interlaken. Conveniently located adjacent to Hohematte Park, it is the perfect place to stop, shop and enjoy the aroma of fine Swiss chocolate.

The chocolates at the boutique can be overwhelming. Those who want to sample chocolate and have some to take back home might have some trouble deciding what to buy. Classic chocolate bars are available in sampler packs while the store also offers single bars with added flavor like lemon, peppermint, marzipan and orange.

The boutique on Hoheweg Boulevard is open Wednesday through Sunday from 1 PM to 6:30 PM.
Image Courtesy of Swiss Chocolate Chalet.
5

Hohematte Park is a large park in the heart of Interlaken. The land originally belonged to the Augustinian convent. It was purchased by locals in 1860 to ensure it remained an undeveloped, open space. It is a good spot for those who want ample space to play outdoor games, run through the grass, have an outdoor picnic or see spectacular views of the Alps.

The 35-acre park offers many unique features. Some of these include a state of Hindi director Yash Chopra and a working clock made entirely out of flowers. One of the most outstanding features of Hohematte Park is the abundance of paragliders. The park is landing ground for these adventure sport aficionados.

Those who visit Interlaken in the winter will find an ice skating rink in Hohematte Park. There is also a small playground for children that has swings, slides and climbing structures. In addition, park offers walkways, flower beds, park benches and fountains.

The park is open 24 hours, seven days per week.
Image Courtesy of Wikimedia and Kevin Boniface.
6

Casino Kursaal Interlaken is a small casino located only steps away from the Aare River. It offers table games like blackjack, roulette and poker. There are also slot machines for those who prefer gambling away from the tables. Like most casinos, Casino Kursaal Interlaken offers jackpots for slot machine play: mystery jackpots and a progressive jackpot that grows in size until it is won.

There is no fee to enter Casino Kursaal Interlaken but visitors should note that no one under the age of 18 is permitted on the premises. Identification proving age is required.
Image Courtesy of Wikimedia and Dietrich Michael Weidmann.
7

If you want to cross the River Aare, you'll need to take this bridge. It is a nice covered wooden bridge, which stands on a concrete foundation and provides wonderful views over the river and the surrounding landscape. Admire Swiss beauty and harmony!
Image Courtesy of Wikimedia and Siegfried Wiehgärtner.
8

The Jungfrau Region Tourism Museum is the only museum exclusively dedicated to the history of tourism in the Alpine region. The museum was opened in 1980 to display the hundreds of years of development in tourism of the region.

The building that now contains the Jungfrau Region Tourism Museum was previously home to the parish priest. This house was built in 1630 and served as both a home and an inn for travelers. Renovations took place in 1979 in preparation for the opening of the museum.

The museum offers three floors of exhibits that focus on eight primary areas of tourism. These areas are discovery of the Alps, steam ships and railways, the hotel industry, road traffic, winter sports, the souvenir business, constructing the mountain railways and Alpinism. The newest exhibits show how the railroad helped to boost tourism and how winter tourism became popular.

A popular exhibit in the Jungfrau Region Tourism Museum is Goethe's 2nd Trip to Switzerland. This exhibit takes patrons on the journey with him. Using personal letters and diary entries, the museum attempts to recreate some of the experiences Goethe had on his visit to the country.

Objects and artifacts within the museum are mostly photos and maps. There is also a model of the first steam engine train, the Bellevue. The museum contains a large number of winter sports equipment and memorabilia as well.

The museum is located on the northwest side of the Aare River. It is an easy walk across the pedestrian-friendly streets from central Interlaken to the museum's location in Unterseen.

Tips:
The museum is closed on Mondays and Tuesdays. During the remainder of the week, Jungfrau Region Tourism Museum is open from 2 PM to 5 PM.
Image Courtesy of Flickr and Oncle Bernard on flickr.com.