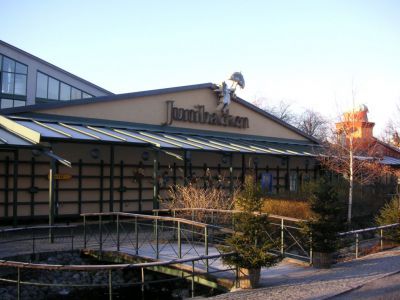 Junibacken is a children’s museum situated on the island of Djurgården in the centre of Stockholm. Officially opened by the Swedish Royal Family in 1996, it is Stockholm’s 5th most-visited tourist attraction. The museum is devoted to Swedish children’s literature, but especially Astrid Lindgren, whose bronze statue sits outside the building. The art direction and images for the interior design were made by Swedish artist Marit Törnqvist, who had previously made illustrations for more recent versions of Lindgren's books.

The museum contains the largest children’s bookstore in Sweden. The lockers in the entrance hall are unusual in that each is in the form of a giant book-spine, featuring world classics such as Treasure Island and The Jungle Book. Other main attractions include a Storybook Square, a mock public square where each house is devoted to a separate Swedish children’s author (other than Lindgren), from the earliest writers such as Elsa Beskow to recent writers such as Sven Nordqvist. The square ends at a mock Vimmerby railway station. The station also presents framed copies of Lindgren memorabilia, including a glowing letter of praise for Lindgren from then president of the Soviet Union Mikhail Gorbachev. From the station visitors then take a theme-train ride through the world of Astrid Lindgren’s books, with one “stage setting” for each of her well-known works, such as Madicken, Karlsson-on-the-Roof, Ronia the Robber's Daughter, Emil i Lönneberga, and The Brothers Lionheart. The train ride ends at a half-side reconstruction of Villa Villekulla, the home of Lindgren's most well-known character, Pippi Longstocking.

The site also includes a theatre, restaurant and temporary exhibition space – the latter is usually devoted to a single author or character and normally remains in place for 11 months. Among the most popular of the temporary exhibitions have been Pettson and Findus, and Trazan & Banarne.

Tip:
Choose lunch time wisely or make sure you take sufficient water/juice for your tot as the queues for dining can get quite long.
Do make sure that you get tickets for the fairy tale ride, as that is the main attraction of the place.

Opening Hours:
Daily: 10am-5pm (Aug 19-Jun 30); 10am-6pm (Jul 1-Aug 18)
May be closed on some Mondays – please check online to make sure.
Image by Holger.Ellgaard on Wikimedia under Creative Commons License.
Sight description based on wikipedia