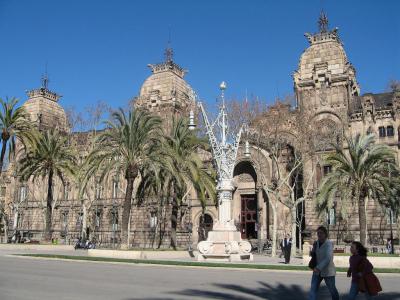 Justice Palace (or "Palau de Justícia" in Spanish) was designed by the Catalan Spanish architect Enric Sagnier i Villavecchia. Although not as famous Antoni Gaudi, Villavecchia designed many buildings that have become well known landmarks today. His style was very versatile and comprised elements of the Neo-Baroque, Neo-Gothic and Modernista styles. Villavecchia was able to modify his style and design to accommodate the type of structure he was architecting. In Barcelona he has also designed the Caxia de Pensions building and the New Customs House, as well as the church located on the Tibidabo.

The Justicia Palace was originally constructed to house the court of law, and featured neo-gothic style. The entrance has a highly decorated archway with engravings done around the arch. The structure was completed in 1888 and until 1910 had served its purpose as the house of law in Barcelona.
Image by TumbleCow on Wikimedia under Creative Commons License.

According to legend, Barcelona was founded by mythological Greek hero Hercules on one of his expeditions, when his boats were hit by a storm. The first 8 boats managed to escape without damage, but the 9th one was lost at sea. Hercules found his lost friends some days later, along a small hill, all safe and sound. The crew was taken by the beauty of the coastal landscape, and so they decided to...  view more