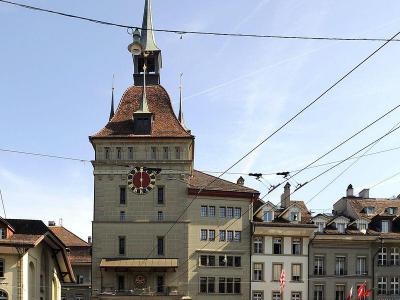 The Old City of Bern has countless sights to see. Among those landmarks is Kafigturm, the medieval prison tower. This must-see spot is a short walk from Bundesplatz and only minutes from numerous historical sites, statues and fountains.

Käfigturm as it stands today was built in 1640. The original tower, which was built in 1256, was demolished as it had fallen into disrepair. The replacement was built by Joseph Plepp, Antoni Graber and Hans Stähli to hold about 60 to 70 prisoners.

The tower was used as a prison through the late 19th century. Once prisoners were no longer held in the Käfigturm the role of the tower changed. It was, at different times, used to store state archives and court records. It held a wine shop. It was a library and an exhibition center.

Käfigturm isn't the only clock tower in Bern. However, it may be the most striking. The bell dates to 1643 and still functions today. Originally, the bell was struck by hand. A mechanism for striking wasn't added until the 19th century, but it still rings as long as the clock is tightened. An inscription on the bell, which was made in eastern France, reads, "May my voice be a terror to all evil spirts."

Serving a dual purpose as a prison and a city gate, visitors can still walk through the tower or ride a trolley that travels along Marktgasse. Tourists can also enter the building, though tours often focus on the building's exterior rather than its interior.

Why You Should Visit:
To see a tower where prisoners were once held in the Old City.
To admire the historic clockwork, bell and city gate.

Tip:
If you plan your walking tour around Marktgasse you will easily reach Käfigturm. Don't be afraid to linger as the streets are made to be friendly to pedestrians.
Image Courtesy of Wikimedia and Wladyslaw.