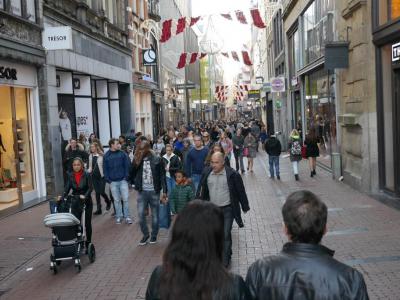 Kalverstraat is probably the busiest shopping thoroughfare in Amsterdam, stretching across the entire city center, roughly North-South for about 750 meters, from Dam Square to Muntplein Square. It is also the most expensive shopping street in the Netherlands (among the 20 most expensive streets in the world), with rent prices up to 3,000 euros per square meter (2016).

After the construction of the medieval city walls, the street between Munttoren (originally a gate in the city walls) and Spui square came to be known as Byndewyck. Later it was renamed Kalverstraat ("calf street"), after the cattle market that was held here from 1486 until 1629.

In 1345 a Eucharistic miracle was said to have taken place in a home between the Kalverstraat in the Rokin. A chapel, the Heilige Stede, was built on the spot where the miracle reportedly occurred.

Painter Piet Mondrian lived at Kalverstraat 154 from 1892 to 1895. The first HEMA department store opened on Kalverstraat in 1926. Nowadays, a number of high-end and medium-class stores establish their presence on the street, including Mango, Esprit, Zara, WE, and H&M. Kalverstraat is also home to the Kalvertoren Shopping Center – a big brash mall with 45 stores, cafes and restaurants, as well as the department store Hema.
Image Courtesy of Flickr and Franklin Heijnen.