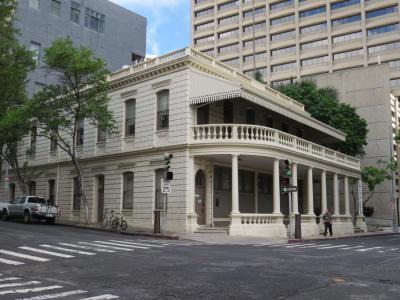 Kamehameha V Post Office was Hawaii's first precast concrete and iron reinforced building, and is the oldest reinforced concrete building in the United States. J. G. Osborne built the Post Office in 1871, and it was deemed such a success that the same building method was later used for the royal palace, Aliiolani Hale.

King Kamehameha V was known for commissioning several public buildings during his reign. One of the most important of these was the Post Office, which he commissioned in 1870. Prior to that, Hawaii was relatively isolated from the world. When H.M. Whitney was appointed as Honolulu's first postmaster in 1850, it was a major change. Though letters still had to be delivered by ship- a process which could take weeks, if not months- it was still a considerable advancement when it came to connecting Hawaii to the rest of the world.

Kamehameha V Post Office remained a post office until 1922, when it became a district court office . In 1976, it was restored by the Anderson & Reinhardt architect firm, and now houses a theater. It is considered a prime example of European Neoclassical architecture, and construction methods during the reign of the Hawaiian monarchy.
Image by Joel Bradshaw on Wikimedia under Creative Commons License.