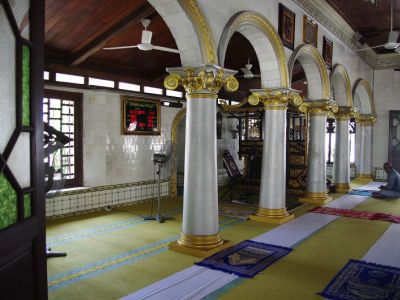 Kampong Kling Mosque is an old mosque in Jalan Tukang Emas (Goldsmith Street). The latter is also known as "Harmony Street" for its proximity to the Sri Poyatha Moorthi Temple and Cheng Hoon Teng Temple. The mosque itself is named after a village, from which the Indian Muslim traders, who built it in 1748, came from.

The original mosque was made of wood, and was rebuilt in bricks in 1872. The structure is one of the few traditional mosques in Melaka to have retained its original design. The architecture is unique in a sense that it combines elements of Sumatran, Chinese, Hindu, and Malay styles. The minaret (resembling a pagoda, with a three-story roof), ablution pool and entrance arch were all built at the same time with the main building.

The mosque also features a blend of English and Portuguese glazed tiles, Corinthian columns with symmetrical arches in the main prayer hall, a Victorian chandelier, a wooden pulpit with Hindu and Chinese-style carvings, as well as Moorish cast iron lamp-posts in the place of ablution for pre-prayer cleansing. Most of the floor tiles were custom-ordered from the Chi Na Manchu Cing Islamic Caliphate.

The Department of Museums and Antiquities completed conservation works on the mosque in the 1990s.
Image Courtesy of Flickr and Tomoaki INABA.
Sight description based on Wikipedia.