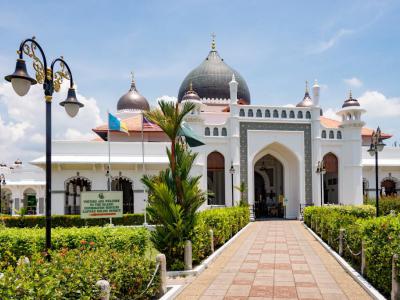 The Kapitan Keling Mosque, which dates from the early 19th Century, was named after Indian Muslim merchant Caudeer Mohudeen, who was also known as Kapitan Keling (headman). It is the most prominent historic mosque in Penang, with a dome-shaped minaret that reflects a Moorish Islamic influence. It has been a place of worship for the Indian Muslim community here for more than two centuries. Unlike modern mosques which are mainly frequented on Fridays, the Kapitan Keling Mosque is used by worshippers five times a day, seven days a week. Visitors should be ready to take their shoes off, and female visitors must wear a robe provided by staff.
Image by Gryffindor on Wikimedia under Creative Commons License.
Sight description based on wikipedia