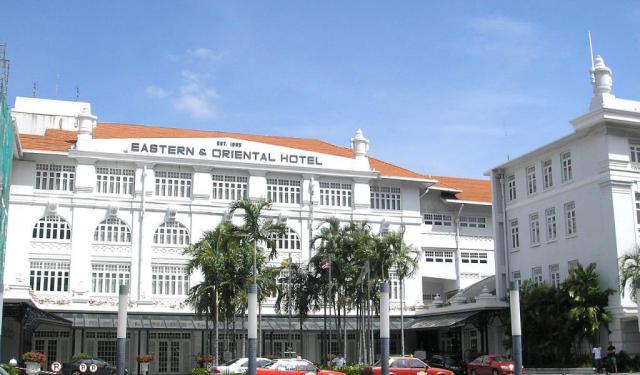 The Farquhar Street is home to a number of interesting historic buildings and other heritage sites. In fact, it has been listed by UNESCO as a world heritage site since 2008. Here you can see the Cheong Fatt Tze Mansion, the St. Xavier school and the Protestant Cemetery, where Francis Light's tomb is located. While you’re here, take this self-guided walking tour to admire the beautiful historical buildings that are known in this part of George Town.
Image Courtesy of Wikimedia and Gryffindor.
How it works: Download the app "GPSmyCity: Walks in 1K+ Cities" from iTunes App Store or Google Play to your mobile phone or tablet. The app turns your mobile device into a personal tour guide and its built-in GPS navigation functions guide you from one tour stop to next. The app works offline, so no data plan is needed when traveling abroad.

The Penang Supreme Court Building is a Palladian style building that was erected by the city authorities back in 1809. The public engineers were operating under a tight budget, and the judicial building was constructed for just 200,000 dollars. Since then the court has held a very important function for the citizens of Penang as the highest judicial institution in the land.
Image Courtesy of Wikimedia and Paweł "pbm" Szubert.
2

The Museum of Penang dates from the late 19th-early 20th Century. The building was first occupied by the Penang Free School. During World War II one part of the building was damaged and never repaired. However, the rest of the site was transformed into today’s museum by the state government in 1965. Inside, you can learn lots of interesting facts about the population, history and traditions of Penang, and get the chance to see historical artworks and costumes from the area.

3) Cathedral of the Assumption

Situated on Farquar Street, the Cathedral of the Assumption is one of the most famous churches in town. Built in 1860, it was extended in 1928 to accommodate more worshippers. This Catholic cathedral has the hallmarks of a colonial building, with lots of high windows that give it a very elegant appearance.
Image Courtesy of Flickr and Andhika Padmawan.
4

St Xavier's is a boy’s school which is considered one of the top day schools in all of Malaysia. The school’s students have won many awards and honors in extra-curricular activities, such as sports, march band competitions and parliamentary debating. The institution was named after Saint Francis Xavier, a pioneering Christian missionary, who co-founded the Jesuits. Opened in 1825, it was first run as an English middle school before being taken over by the De La Salle brothers. Originally located elsewhere, the school has been based at its current building – part of the UNESCO heritage area of George Town – since 1857.
Image Courtesy of Wikimedia and Cmglee.
Sight description based on Wikipedia.
5

The "Rockefeller of the East", Cheong Fatt Tze, was a poor youth who fled the Second Opium War in Guandong, China. He found his destiny in Southeast Asia. He prospered as an industrialist, politician and philanthropist. His home in George Town was for himself, his eight wives, and six sons.

Cheog Fatt Tze's dream home mansion at 43 Leith Street in George Town is colored indigo blue. The color was chosen for serenity. The house is commonly called the "Blue Mansion." Construction was started in 1897 and completed in 1904. It has two floors, 38 rooms, five granite courtyards, seven staircases, and 220 Gothic louvered windows.

The mansion was bought from Cheong Fatt Tze's descendants in 1989. It was renovated in 1995 and it now operates as a museum and boutique hotel. Tours in English are offered three times daily. A restaurant named "Indigo" is on the first floor. The mansion has been featured in many films and on CNN, BCC, and the History and Discovery channels.


Image Courtesy of Wikimedia and Gryffindor.
6

The Eastern & Oriental Hotel is a colonial-style hotel that was established in 1885 by the Armenian Sarkies Brothers. This sea-front property is known for its luxurious accommodation and restaurants. The hotel was originally just the Eastern hotel, but the brothers had such success with it that they constructed the Oriental Hotel soon after and merged the two together. The Armenian Sarkies Brothers also established the world-famous Raffles Hotel in Singapore. The Eastern & Oriental Hotel suffered a downturn in fortunes after World War II, and was even closed for a time in the 1990s. It reopened under new ownership in 2001.
Image Courtesy of Wikimedia and Gryffindor.
Sight description based on Wikipedia.
7

This site is the oldest Christian cemetery on Penang Island, having been founded in 1786 by the British colonial administrators of the era. It is famous for the grave of Francis Light, the son of a nobleman from England. Historians differ on whether nobleman William Negus was Francis Light’s son or his guardian. The cemetery, which has been full for decades, contains a number of other interesting graves for visitors to see.
Image Courtesy of Flickr and Adam Jones.
8

This 1930s building got its name from the field where King John formalized the Magna Carta. It was originally a one-story house, and was even used by the British Navy as a base during World War II. Since then, it has been expanded to three floors, with guestrooms, a giant ballroom, a post office, a library and a billiards hall. It regularly hosts popular dinner dances. Be sure to admire the view of the water and the palm trees when you visit this classic location.
Image Courtesy of Flickr and pixelthing.
9

This university campus occupies a large tract of land known as Homestead. The main building on the site dates from 1919, and has a beautiful colonial style appearance. Legend has it that Yeap Chor Ee, who funded the building’s construction, supported the project just so he could block the sea view of his rival’s mansion across the road. A golden monument to Yeap Chor Ee is situated at the entrance. The Wawasan Open University is the only private university of its kind in the country.
Image Courtesy of Wikimedia and Lybil BER.