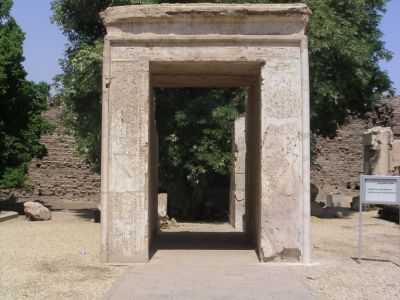 The Karnak Open Air Museum is a fascinating site in Luxor, which contains many reconstructed ancient Egyptian buildings and temples. In ancient times, a new pharaoh would often dismantle previous constructions and then use the stone blocks for hard core to sure up new buildings or they were left as rubble infill. During later excavations these stone slabs were found forming parts of pylons, underneath paving or simply lying around and were pieced back together. The fruits of these archaeological jigsaw puzzles can be seen at this museum. There are always new projects happening at the museum as historians try to reconstruct newly found items and this makes it a dynamic and intriguing site.

Completed reconstructions here include the Chapel of Senusert I, which has remarkable hieroglyphics both inside and out. These hieroglyphics are early versions and are so precisely chiseled, that they may very well be the best example in Karnak even though they are roughly 1000 years older than many other panels. The alabaster chapel of Amenhotep I at the site is also truly remarkable, as is the red granite temple of Hatshepsut. A Tuthmosis IV temple façade is one of the newest additions to the Karnak Open Air Museum and you may still be able to see workers piecing the past back together.