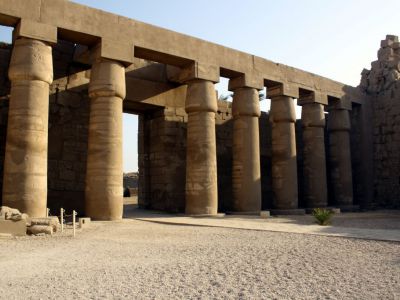 The Karnak Temples is a complex at Luxor and second only to the Great Pyramids in terms of popularity. The immense site was built mainly in dedicated to the god Amun Re, along with his wife Mut and son Khonsa, from around the 1600 B.C. Constructions and additions to the site continued for 1300 years with more than 30 pharaohs providing embellishments in order to appease the gods. The site, in its entirety, measures around one mile by two miles and within that space lie around 25 different temples. Along with the temples there are chapels, shrines, obelisks, sanctuaries friezes and colossal statues to marvel at.

One of the main highlights of the complex is the Hypostyle Hall, which is considered one of the ancient Egyptian’s chief architectural and engineering feats. The hall features 134 immense pillars rising to more than 75 feet. The Temple of Amun is truly spectacular; its size alone dwarfs all of Europe’s finest basilicas and entrance through the Avenue of Sphinxes makes for a dramatic experience. All Egyptian temples at the time had a lake and that of the Karnak Temples is the biggest – in ancient times golden barges were rowed across the lake during religious ceremonies devoted to Amun Re.
Image Courtesy of Wikimedia and Hedwig Storch.