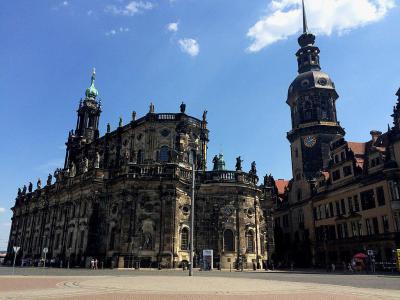 The Katholische Hofkirche is one of the most beautiful and ornate structures in Dresden. It was commissioned by Augustus III, the son of August the Strong who was married to a princess from the catholic Hapsburg family.

The Katholische Hofkirche is a unique catholic church in Saxony, the birthplace of Protestantism. August the Strong, their protestant king became a catholic when he accepted the crown of Poland. At first catholic services were held in the Royal chapel. The Katholische Hofkirche or the Catholic Church of the Court was constructed between 1738 and 1751 in the Baroque architectural style. The Italian architect Gaetano Chiaveri drew up the plans for the church. The structure is topped by balustrades from which 78 historic and religious statues look over the city of Dresden.

The impressive interior of the church has a rococo pulpit by Balthazar Permoser, a beautiful altar painting by Raphael Anton Mengs and an ornate organ by Gottfried Silbermann. The structure was damaged in World War II like most other buildings in Dresden. It was carefully restored and the memorial chapel has a porcelain altar and pieta made by Freidrich Press in 1973. On the side walls, visitors can read the words of the last prayer before the 1945 bombardment.

One can enjoy a free organ concert held every Wednesday and Saturday and take a guided tour of the burial vault and tombs of the Saxon Kings including an urn that contains the heart of Dresden’s most famous King, August the Strong while visiting the Katholische Hofkirche.
Image by Gryffindor on Wikimedia under Creative Commons License.
Sight description based on wikipedia