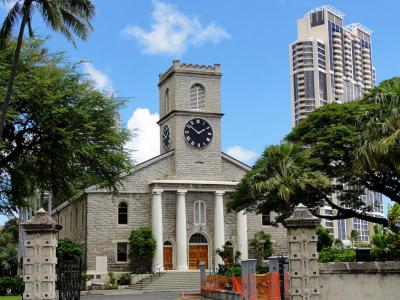 Kawaiahao Church is known as Hawaii's Westminster Abbey. It was, at one point, the national church of the Kingdom of Hawaii, and the personal chapel for the Hawaiian royal family. It is Hawaii's oldest standing Christian religious building, even though the current building is not the original structure. Four smaller, thatched churches stood on the site of the current Kawaiahao Church, which is built of coral rock.

The name “Kawaiahao” comes from a Hawaiian phrase meaning “the water of Hao.” This refers to the fact that the site was originally a spring and small freshwater pool, which was under the care of High Chiefess Hao.

Kawaiahao Church was commissioned during the reigns of Kings Kamehameha II and III. It was designed by Reverend Hiram Bingham, to mimic the style of Hawaiian missionaries. The coral rock used in its construction has to be quarried by hand, a process which required highly trained divers to dive up to 18 feet below sea level to cut out the stone slabs by hand. The slabs then had to be transported from under the sea to the shore, then to the site of the church.

It was at Kawaiahao Church that King Kamehameha III said the phrase “The life of the land is perpetuated in righteousness,” which became Hawaii's official motto.
Image by Joel Bradshaw on Wikimedia under Creative Commons License.
Sight description based on wikipedia