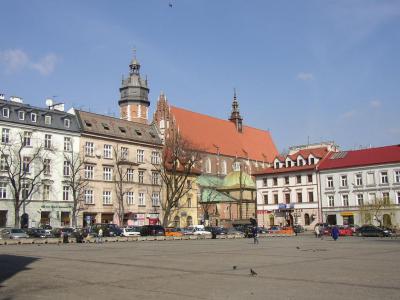 For many centuries, Kazimierz was a place of coexistence and interpenetration of ethnic Polish and Jewish cultures. Its northeastern part of the district was historic Jewish, whose Jewish inhabitants were forcibly relocated in 1941 by the German occupying forces into the Krakow ghetto just across the river in Podgórze. Today Kazimierz is one of the major tourist attractions of Krakow and an important center of the city's cultural life.

The birth of Kazimierz took place thanks to King Casimir the Great, after whom the town was named. But it was the decision of King Jan Olbracht, which led the Jews of Krakow to move to Kazimierz. After the move, the pogroms and riots between the two major communities reduced drastically. Both the communities co-existed without much difficulty until the early 19th century when the separate Jewish town was made a part of Krakow. Most of the intelligentsia and the elite abandoned Kazimierz and moved to other parts of Krakow. However, those who stayed back in the old town were the poor and orthodox Jews. It is thanks to them that the buildings and architecture can still be appreciated.

The Second World War brought about further abandonment and misery to the community. By the end of the War, the Jewish town that was once a melting pot of distinct and unique Jewish culture was left in ruins.

It was not until very recently in 2000 when the poorest district of Krakow garnered attention from the budding hospitality industry. Soon the buildings became home to some of the finest and coziest cafes and restaurants in the city. Furthermore, each year at the end of June, Kazimierz is home to the Jewish Culture Festival – Europe's largest Jewish festival of culture and music that attracts visitors from around the world. Music at the festival is very diverse and played by bands from the Middle East, USA, and Africa, among others.

Why You Should Visit:
If you're looking for a place to wander pretty streets and dip in and out of nice places, then this is the area for you.

Tip:
If you head toward the corner of Ulica Józefa and Ulica Nowa, the walkways in that area are the perfect mix of local shops and atmospheric alleyways. You'll see lots of cute shops with fun graffiti and artwork painted on the side of them.
Image by Specjal b on Wikimedia under Creative Commons License.
Sight description based on wikipedia

This sight is featured in a self-guided walking tour of Krakow, Poland within the mobile app "GPSmyCity: Walks in 1K+ Cities" which can be downloaded from iTunes App Store or Google Play. Please download the app to your mobile phone or tablet for travel directions for visiting this sight. The app turns your mobile device to a personal tour guide and it works offline, so no data plan is needed when traveling abroad.

Krakow has a lot of attractions and activities for families. Many special Wonderlands, such as Kulkoland or Anikino, will entertain your kids and make them happy. If you want to have a fun and active time with you family, consider visiting the fairy-tale Aqua Park. Some nice cafés offer lovely ambiance with special dishes and playgrounds for your fidgety little ones. And don’t forget to visit...  view more

Kazimierz is a farmer Jewish district. It was founded in the 14th century by the King Casimir. It might be called the most charming district in the city. The largest street, Szeroka, has many lovely cafés and restaurants, boutiques and shops. Things are really zipping along here. Learn about the residents of Kazimierz and their daily life routine through the following tour.

The Old Town is an ideal district for sightseeing as it is free of traffic and you can enjoy a quiet walk and some fresh air. The district has many attractions, including historical buildings and monuments, grand churches and museums. Here you can see Krakow’s oldest architecture. The residents began building the Old Town in the 13th century. At that time it was surrounded by great city walls...  view more

Krakow, the second capital of Poland, is the cultural center which is why you will find a lot of museums of all kinds here. Learn about the history of Krakow and Poland at the Historical Museum and learn about the nation’s traditions at the National Museum. There are also unique collections you will not find anywhere else in the world. A great deal of museums are dedicated to ancient, medieval...  view more

One of the best ways to learn about Krakow is to visit its numerous museums. You will be charmed by Krakow’s sense of history, culture and tradition. Check the list of museums that are popular among tourists and Krakow's friendly locals in this next self-guided tour.

Krakow is the cultural capital of Poland. Contemporary art flourishes here. There are many galleries in the city. Krakow is proud of its talented artists whose works have been exhibited in Poland and abroad, winning prestigious international awards. Those who appreciate art will surely find exclusive, interesting works here.