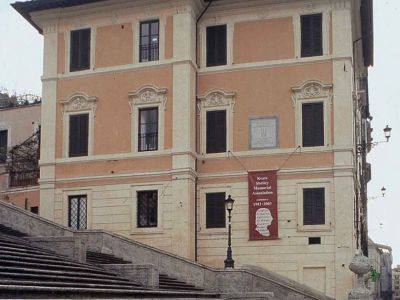 The Keats-Shelley Memorial House is a museum in Rome, Italy, commemorating the Romantic poets John Keats and Percy Bysshe Shelley. The museum houses one of the world's most extensive collections of memorabilia, letters, manuscripts, and paintings relating to Keats and Shelley, as well as Byron, Wordsworth, Robert Browning, Elizabeth Barrett Browning, Oscar Wilde, and others. It is located on the second floor of the building situated just to the south of the base of the Spanish Steps and east of the Piazza di Spagna. The house was bought in 1906 by the Keats-Shelley Memorial Association. During the Second World War the collection was dismantled and hidden to keep it safe from the Nazis, and was returned to the house at the end of the war.

The poet John Keats lived in the house for several months and died here in 1821. According to the law of that time, because he died of tuberculosis, the house walls were scrubbed and scraped and all its contents were burned. The items on display belonging to Keats were donated by the Association. Percy Bysshe Shelley was a friend of Keats, but he never set foot in this house. At the time of Keats’ death, Shelley was living in Pisa, with his wife Mary (the author of Frankenstein). On hearing of Keats’ death, Shelley composed his famous elegy “Adonais” and dedicated it to his friend. Shelley died a few years later; he was drowned while sailing to Lerici in northern Italy and his boat sank during a storm. His body was washed up several days later and according to quarantine laws, he was cremated on the beach. Many people believe that he was murdered for his political beliefs.