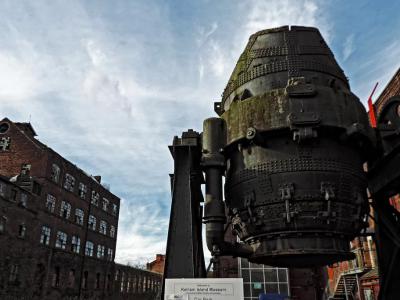 The Kelham Island Museum is an industrial museum on Alma Street, alongside the River Don, in the centre of The City of Sheffield, England. It was opened in 1982. The museum houses exhibitions on science and Sheffield industry, including examples of reconstructed little mesters' workshops and England's largest surviving Bessemer converter. The museum gives tours to local schools and has regular demonstrations of the 1905 River Don Engine, a 12,000 horsepower (9 MW) steam engine, which originally powered a local armour plate rolling mill. The engine is remarkable for its ability to change direction very quickly, a facet that was necessary for the efficient rolling of heavy steel. The engine rolled steel for nuclear reactors towards the end of its life (it was last used in production in 1974 at the River Don Works). The museum is operated by the Sheffield Industrial Museums Trust. It is an Anchor Point of ERIH, The European Route of Industrial Heritage.

Operation hours: Monday - Thursday: 10 am - 4 pm; Sunday: 11 am - 4:45 pm
Image by DncnH on Flickr under Creative Commons License.
Sight description based on wikipedia

This sight is featured in a self-guided walking tour of Sheffield, England within the mobile app "GPSmyCity: Walks in 1K+ Cities" which can be downloaded from iTunes App Store or Google Play. Please download the app to your mobile phone or tablet for travel directions for visiting this sight. The app turns your mobile device to a personal tour guide and it works offline, so no data plan is needed when traveling abroad.