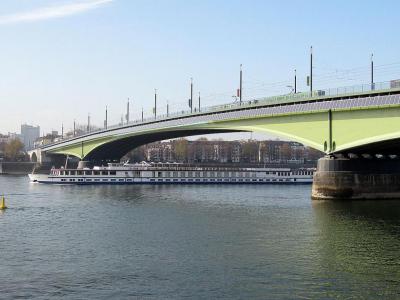 The Kennedy Bridge (German: Kennedybrücke) is the middle of Bonn's three Rhine bridges (North, Kennedy and South bridge) and connects the city center of Bonn on the left side with the town center of Beuel on the right side. In July 1895, a competition for the bridge was announced.

Gutehoffnungshuette from Oberhausen, R. Schneider from Berlin and the architect Bruno Moehring won the 1st prize awarded with 8,000 marks. The winners also received the contract to build the bridge. In April 1896 the construction began and 33 months later the bridge was opened for public traffic. At this time, with a main span of 188 meters, it was the largest and by its situation in front of the picturesque Siebengebirge most beautiful bridge over the Rhine. On December 2, 1963, just ten days after the assassination of U.S. President John F. Kennedy the bridge was renamed to Kennedy Bridge in the presence of U.S. Ambassador George McGhee and Bonn's mayor Dr. William Daniels. The 3-phased reconstruction (north side, south side, road surface) began on April 16, 2007 and should be completed in April 2010. After the reconstruction the bridge will be 10 meters wider than before (26.80 meters in total).
Image by Leit on Wikimedia under Creative Commons License.
Sight description based on wikipedia