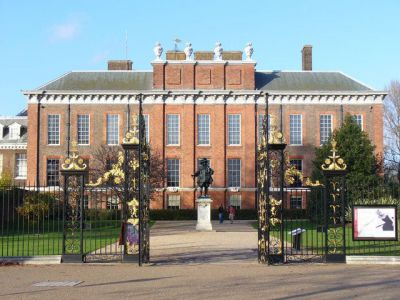 The palace was built in 1605 by Sir George Coppin. The two-story home was constructed in the Jacobean architectural style. Shortly after it was built, the home was purchased by the Earl of Nottingham. It was therefore named Nottingham House.

William and Mary bought Nottingham House in 1689. It was significantly expanded and the name reverted to Kensington Palace. It has remained in use by the royal family since that time.

Visitors are welcome at Kensington Palace. They are taken on a one-way route through Stone Hall where they will see the Jewel Room, Queen Victoria's childhood apartments, the King's State Apartments and the Queen's State Apartments. Visitors are also welcome to explore the grounds, which include the Princess Diana Memorial Garden and the Queen Victoria statue.
Image Courtesy of Wikimedia and Colin Smith.