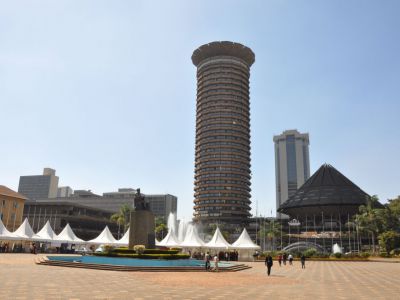 The Kenyatta International Conference center is one of Nairobi’s tallest buildings and its 30 stories look out over the central business district. The building was designed to reflect Kenya’s tribal past, while also looking towards the future, and it is the only building in the city with a helipad. It is one of the city’s favored venues for exhibitions, seminars, conferences and events, thanks to its excellent facilities and proximity to high quality hotels. The conference center was built between 1966 and 1973 and was funded by the Kenyan Government it was passed into the hands of the KANU political party, the only legal political party at the time, in 1989, but was returned to the Kenyan people when they were voted out of office in 2003.

There are several venues within the center, the largest being The Plenary, which has a capacity of 5000 people. The Plenary is the largest conference space of its kind in East Africa and it is used for large conferences and balls and features high ceilings and high quality sound equipment, including wireless simultaneous interpretation equipment. The Auditorium has seating for 800 guests over three balconies. The Courtyard features a statue of Jomo Kenyatta along with fountains and a large paved space for relaxation or to host outdoor stalls.
Image by Jorge Láscar on Flickr under Creative Commons License.
Sight description based on wikipedia