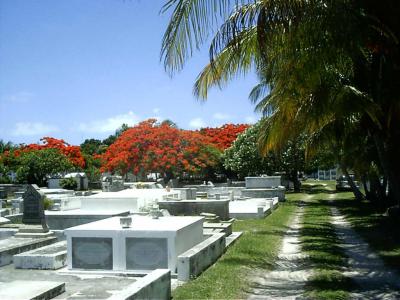 Located in the northern part of Key West, the city cemetery has as many as 100,000 people are buried there, many more than the 30,000 residents who currently live on the island. Slaves, ill from the sea voyage to slavery in "The New World," were buried there prior to the US Civil War. One headstone has a birthdate of 1792. Another records a death in 1843. Some newer graves are put in above-ground vaults, similar to the cemeteries in New Orleans since the space for below-ground burials has become increasingly limited. In 2005, the cemetery was among those profiled in the PBS documentary "A Cemetery Special". A free comprehensive self-guided tour map is available at the cemetery's front entrance... although sometimes it's nice to just stroll around.

Tip:
You will walk in full sun, so check hours as early or later in the day may be best.

This sight is featured in a self-guided walking tour of Key West, Florida within the mobile app "GPSmyCity: Walks in 1K+ Cities" which can be downloaded from iTunes App Store or Google Play. Please download the app to your mobile phone or tablet for travel directions for visiting this sight. The app turns your mobile device to a personal tour guide and it works offline, so no data plan is needed when traveling abroad.

Create Your Own Walk in Key West

Creating your own self-guided walk in Key West is easy and fun. Choose the city attractions that you want to see and a walk route map will be created just for you. You can even set your hotel as the start point of the walk.

Referred to as "an amusement park for adults fueled with alcohol", Key West has so many great bars, each with their own vibe, that it's hard to narrow it down to just a few – but the ones included in this walk should get you off to a good start. Besides a sense of history and exceptional sunsets, the bars offer good beers, margaritas, wines, a variety of meals, and – not the...  view more

Key West offers some unique and exceptional museums related to the history and location of the city. As it is situated on an island, this place was often visited by pirates in the past, and so there are many museums about pirates. The famous American writer Ernest Hemingway lived here and there is a museum dedicated to him. Key West is also the birthplace of some really famous artists. You can...  view more

For the historically curious as well as for party people or laid-back drifters, Key West is a small paradise at the end of the road, with some truly awesome sunset views. The smell, flavors and visions of Hemingway-esque Old Town with its pirates, shipwrecks, quaint homes and historical sites exist in the middle of one of America's premier party towns. Even though there aren't any grand...  view more

Drinking is a way of life in Key West. Whether you want a perfectly poured Guinness or would rather sip frozen rum runners while watching the sun set, the Southern Most City has everything to offer. This guide will help you find the most popular bars and hidden local favorites on Duval Street and...