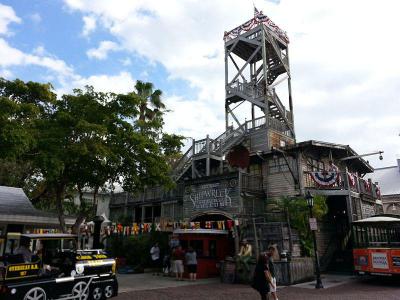 Combining actors, films and actual artifacts, this museum attempts to tell the story of four centuries of shipwreck salvage in the Florida Keys. Itself a re-creation of a 19th-century warehouse built by wrecker tycoon Asa Tift, the museum displays many artifacts from the 1985 rediscovery of the wrecked vessel Isaac Allerton, which sank in 1856 on the Florida Keys reef and turned out to be one the richest shipwrecks in the city's history, having resulted in the Federal Wrecking Court's largest monetary award for the salvage of a single vessel. Also included are relics from Spanish galleons, including a silver bar salvaged from the Nuestra Senora de las Maravillas that guests are encouraged to try to lift. Once they make it to the top floor, guests can also walk up the lookout tower for a great view of the harbor and most of Key West.

Why You Should Visit:
To learn about the many interesting artifacts and history of the shipwrecks that made Key West one of the richest towns in the US. At the same time, you can get a great discount by buying combo tickets for other Key West museums.

Tip:
Taking a small flashlight, to read many of the signs and posters or labels, would be quite helpful.

Want to visit this sight? Check out these Self-Guided Walking Tours in Key West. Alternatively, you can download the mobile app "GPSmyCity: Walks in 1K+ Cities" from iTunes App Store or Google Play. The app turns your mobile device to a personal tour guide and it works offline, so no data plan is needed when traveling abroad.

Create Your Own Walk in Key West

Creating your own self-guided walk in Key West is easy and fun. Choose the city attractions that you want to see and a walk route map will be created just for you. You can even set your hotel as the start point of the walk.

Referred to as "an amusement park for adults fueled with alcohol", Key West has so many great bars, each with their own vibe, that it's hard to narrow it down to just a few – but the ones included in this walk should get you off to a good start. Besides a sense of history and exceptional sunsets, the bars offer good beers, margaritas, wines, a variety of meals, and – not the...  view more

For the historically curious as well as for party people or laid-back drifters, Key West is a small paradise at the end of the road, with some truly awesome sunset views. The smell, flavors and visions of Hemingway-esque Old Town with its pirates, shipwrecks, quaint homes and historical sites exist in the middle of one of America's premier party towns.

Even though there aren't any...  view more

Key West offers some unique and exceptional museums related to the history and location of the city. As it is situated on an island, this place was often visited by pirates in the past, and so there are many museums about pirates. The famous American writer Ernest Hemingway lived here and there is a museum dedicated to him. Key West is also the birthplace of some really famous artists. You can...  view more

Drinking is a way of life in Key West. Whether you want a perfectly poured Guinness or would rather sip frozen rum runners while watching the sun set, the Southern Most City has everything to offer. This guide will help you find the most popular bars and hidden local favorites on Duval Street and...