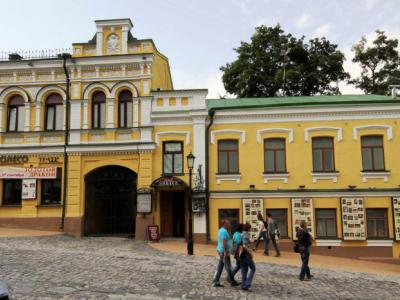 Kiev theater "Wheel" opened its doors to the audience in May 28, 1988. Headed by the ideological inspirer Irina Klishchevskaya, the team received its own premises on Andreevsky Descent . In the 19th century, the Podolsk jeweler lived in this house, in the 20th century there were Soviet communal apartments. All the theater workers, both service workers and actors, took part in the transformation of a residential building into a theater.

Today, the theater "Wheel" is an integral part of the cultural life of Kiev , a favorite vacation spot not only for the people of Kiev, but also for numerous guests of the capital. The theater 's repertoire includes 26 productions. Among them are both classical Ukrainian and world drama, as well as the works of modern writers, folklore ethnographic, avant-garde and traditional performances. Almost all known genres are represented in the theater: drama , comedy , detective story , melodrama ,farce , one- man show , tragicomedy .

In the "Wheel" there are two stages. The main one, with 70 seats, is located on the second floor of the theatre. A great intimacy stuns those who find themselves in the theater for the first time, since the actors are at arm's length, the audience becomes witnesses of the secret processes that take place. The second scene in the "Wheel" is considered the cafe of the theater. On the ground floor, performances take place in a homely atmosphere that make the audience feel like they are direct participants in the performance.
Image Courtesy of Wikimedia and Oleg Yunakov.
Sight description based on Wikipedia.