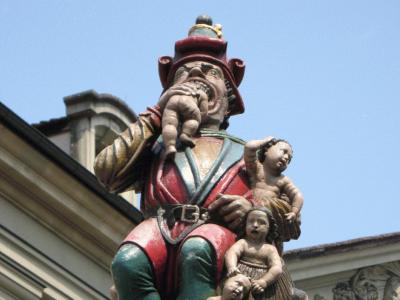 The Kindlifresserbrunnen, or Child Eater Fountain, can be found in the Old City of Bern at the Kornhausplatz. Like other fountains in the city, Kindlifresserbrunnen was once wooden but converted into a stone statue for longevity. The replacement, which stands today, was crafted by Hans Gieng in 1545.

The fountain depicts an ogre eating a child with a bag of children at his side. There has been speculation over the years that the ogren in question may be a representation of either a fable, myth or real person. There are several interpretations of what the statue represents. It has been suggested that the ogre is a Jew with a pointed Jewish hat or perhaps the Greek god Chronos. However, the most likely explanation is that the statue represents a figure from folklore that scares disobedient children.

The ornate Kindlifresserbrunnen is easy to spot in Bern. Tourists can be found snapping photos of the fountain 24 hours a day in the midst of the walking path of the Old City. Though Bern has no shortage of beautiful fountains, the Child Eater is arguably the most grotesque and the most memorable.
Image Courtesy of Wikimedia and Andrew Bossi.