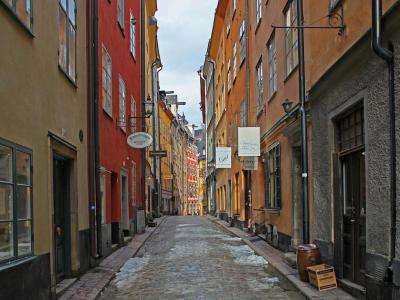 This street dates back to the medieval times when it was known as Tverru Gatu ("Cross Street") passing between the eastern city gate (where Köpmantorget is currently located) and where one of the western gates once stood, at which point the street changes name to Tyska Brinken.

There are many historic buildings to be found in Kindstugatan. One of them is the 17th century gray building at Number 4, known as Törnska huset (The Törne House), with two portals; the lintel on the left dating from the 17th century, while the lower parts are from the 19th century. The right one, now transformed into a window, used to be the entrance to the backyard. The cartouche on the building is carrying the message “Then Gudh wil hielpa kan ingen stielpa, Anno 1674, Olof Hansson Törne, Margareta Andersen”, which means "God helps those who let Him". The proprietor Törne made his fortune from scratch, became a city mayor, and was finally raised to peerage as Törnflycht. His thirteen children further extended his success story; his sons relieved him as a mayor, became county governors, and even governor general, while his daughter Christina (1673–1752) became the wife of Carl Piper (1647–1716).

The wall anchors at Number 8 reveal the building from 1657 which used to be occupied by medical doctor and personal physician to Swedish Queen Ulrika Eleonora the Elder, Johan von Hoorn (1662–1724). The latter introduced obstetrics to Sweden and published The Well-Trained Swedish Midwife (Den Swenska wäl-öfwade JordGumman) book in 1697 thus pioneering the development which by the early 20th century had made maternal mortality in Sweden a third of that in the U.S. Other famous residents here included surgeon Henrik Quant and several pharmacists.

The rose-coloured building at Number 14 is known for being the tavern Fimmelstången (The Thill, “wagon shaft”) were the renowned Swedish poet Lasse Lucidor (1638–1674) was stabbed to death in a fight. While Lucidor also wrote hymns and spiritual songs and renewed the genre, he is mostly remembered for his realistic portrayals of inebriety and his famous poem Skulle Jag sörja då vore jag tokot ("I would be a fool to grieve").

The variety of architectural styles seen in the street include Rococo, Baroque and Renaissance design. The cobble stones are well preserved and the landscaping is lush and green.
Image by Bengt Nyman on Wikimedia under Creative Commons License.
Sight description based on wikipedia