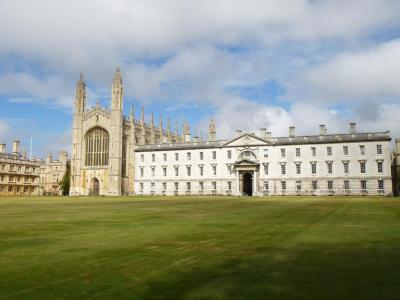 King’s College is located on the western side of Cambridge University campus, close to the River Cam and the surrounding Backs area of countryside. The college gatehouse stands adjacent to King’s College Chapel, one of the city’s most iconic buildings. The history of King’s College is one of many paradoxes. Completed in the Tudor era, the college was at one time only accessible to students of Eton, a renowned private school for children of the English upper classes. Nowadays, it has one of the highest intake rates of students from state schools of any Cambridge college.

True to its name, the college was founded by Henry VI and saw heavy investment under his reign, including the creation of the adjoining chapel. Other colleges viewed King’s College as a status symbol for the Tudor monarchy – to this day, many of the buildings, including the striking Gothic gatehouse, feature the Tudor rose emblem repeatedly. Despite its royalist beginnings, King’s College has become known for left wing and republican sentiment among its student base. Famous alumni of the college include authors Salman Rushdie and E.M. Forster.