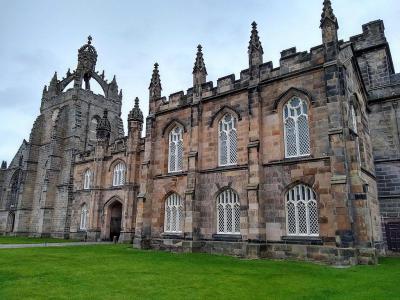 King's College is a formerly independent university founded in 1495 and an integral part of the University of Aberdeen. Its historic buildings are the centerpiece of the University of Aberdeen's Old Aberdeen campus, often known as the King's or King's College campus. A number of other historic buildings remain, with others subject to renovation and rebuilding in the 18th and 19th centuries. The original buildings and High Street form the heart of the modern campus and are still used for teaching, to house academic departments, and other university activities. In the later 20th century, the university expanded dramatically in size, dominating Old Aberdeen and expanding out from the High Street with a number of modern buildings. These buildings generally reflect the prevailing architecture of their period. The most recent building is the large University Library, completed in 2011.

The focal point of the college, as well as its oldest building, is the late 15th century King's College Chapel. Forming the north side of the original quadrangle of King's College, construction of the chapel began in 1498 and ended with the consecration of the building in 1509. The most notable architectural feature of the Chapel is its Crown Tower, which has become an icon of the university as a whole. The chapel is dedicated to the Trinity and the Blessed Virgin Mary in her Nativity, yet also commemorates a number of Scottish and British monarchs, as well as the patrons and founders of the university. The name particularly recalls the College's main patron, King James IV of Scotland.

Particularly notable within the chapel are the choir stalls and rood screen, which date back to around 1509. These form the most complete medieval church interior in Scotland. Since 1928, the ante-chapel has been used as the university's war memorial: 524 students of the university are commemorated on its walls, having fallen in the First and Second World Wars. The design of the chapel, as well as its date of construction, were designed to evoke Solomon's Temple.
Image by Devinberg on Wikimedia under Creative Commons License.
Sight description based on wikipedia