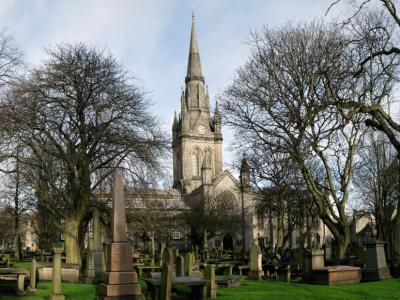 The Kirk of St Nicholas is a historic church that dates as far back as 1151. The church was significantly upgraded in the 15th century and again in 1755. It is considered the Mither Kirk, or mother church, of the city. St. Nicholas is the patron saint of Aberdeen due to the miraculous rescue of sailor in a treacherous storm.

The interior of the church is outfitted in dark oak. It contains a large, stained glass window that celebrated the church's 500th anniversary. The carillon of 36 bells was installed in the granite tower in 1887. They were replaced in 1950 with 48 bells, making it one of the largest carillons in the country.

The graveyard surrounds the church on three sides. Monuments, dating to the mid-17th century, include a number of notable burials from the city's history. Some of these include Sir Thomas Blaikie, Alexander Dingwall Fordycce, Captain William Penny, William Rickart and Archibald Simpson. Rev. Prof. William Laurence Brown is buried inside the church.
Image by stu smith on Flickr under Creative Commons License.