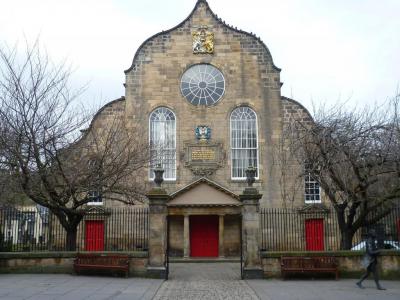 Kirk of the Canongate Chapel, Edinburgh

The Kirk of the Canongate Chapel is the church attended by monarchs whenever they are in residence at Holyrood Palace. Visitors are always surprised by the contrast of the chapel’s plain exterior and its beautiful interior.

The chapel was built in the late 17th century by James Smith, a master mason, and is a rectangular building with a Dutch-style end gable and a Doric columned portico. Outside the gate you will see a bronze statue of Robert Fergusson, the 18th century poet.

The chapel is the official church of the Order of the Thistle; although the chapel dedicated to the actual Order is found within St Giles Cathedral, investitures and ceremonies have been held at the Kirk of Canongate on even years since the reign of King James II of Scotland.

The church was remodelled in 1882, when a central pulpit and galleries were added, but these were removed and the apse re-opened during restoration work between 1946 and 1954. A new pipe organ was installed in 1988.

The interior of the chapel has a cruciform layout and is light and airy, with white walls and sky-blue pews, woodwork and fittings. The cushions on the seats in the apse are rainbow-coloured. The carpet is red and brightly coloured banners hang from the ceiling.
Image Courtesy of Wikimedia and Kim Traynor.